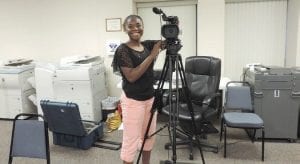 CAHS senior Randi Richardson honed her skills as a videographer at the July Flint Township board meetings.

FLINT TWP. — With a career goal of becoming a national media correspondent, it is a boost for Carman- Ainsworth High School senior Randi Richardson to get experience this summer videotaping Flint Township board meetings. So far, she’s videotaped both July meetings, which aired on local public access television Comcast Cablevision Channel 17.

Randi landed the assignment a few weeks ago through Terry Locke, owner of Dynamite Video Productions, the company contracted to tape township board meetings.

Locke also works with C-A’s high school and middle school broadcasting classes where he helps teach students the ins and outs of television and multi-media production.

Familiar with Randi’s work during the school year in the high school journalism/broadcasting class taught by Colette Bryan, Locke asked Randi to assist him during a short-term scheduling conflict this month.

“What I like most is the exposure that I’m getting, the on-the-job camera experience, networking and meeting new people,” Randi said. “Mr. Locke made it clear that he would not be at the meetings helping or watching me because he has a previous commitment the same night as the Flint Township meeting.”

For some rookies, it could be a daunting task, but Randi is up for the challenge.

“I would not say that I was or am nervous about being there by myself because I have learned so much from Mrs. Bryan and I’m comfortable behind the camera,” she said.

At school, Randi often mentored other students and took on extra assignments for Bryan and Locke.

Also, as part of the CAHS Accelerated Graduation Opportunity (AGO program), Randi is currently taking a public speaking course at Mott Community College. This is her fourth year in AGO.

Since school dismissed for the summer, Randi has kept busy further honing her skills by writing essays and working diligently on her advanced placement English Class summer reading assignment.

Also this summer, she’s spent time videotaping statewide mental health workshops for her father’s (Recco Richardson) consulting business. So far she has videotaped four childhood/ adolescent trauma workshops (two in Midland and two in Saginaw). The plan is for Randi to use the footage to create 30-second commercials and five-minute discussions. Randi captured the materials using a high-quality hand-held video camera purchased for her last fall by her mother Rene Richardson.

During the past 12 months, Randi has received admissions information and honor’s college brochures from top-rated journalism/broadcasting programs located on the east coast and in the Midwest. She has had regular email contact and phone conversations with each of the college’s basketball coaches. The basketball teams compete at the Division I, II and III level.

In yet another of her summer achievements, Randi was named All-Star Game Most Valuable Player at the prestigious Keystone State Invitational Basketball Camp in Pennsylvania in late June, which annually brings together many of the best basketball players in the East. The camps are NCAA certified.