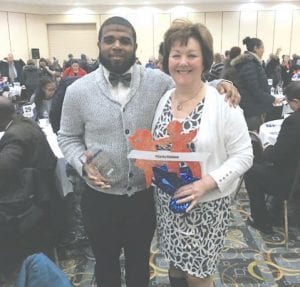 CAHS senior Cameron Reaves is the 2018 winner of the Priorities Children Youth Award, presented recently at the 23rd annual Children’s Champion Breakfast. He is shown here with Principal Debbie Davis.

The Weiss Award is presented each year to a high school student who has done something special to help make Genesee County a better community for children. The winner also receives the $1,000 Guy and Linda Moxam scholarship.

Cameron was one of three CAHS students nominated for the award.

Cameron’s accomplishments include acting as a positive role model and providing reading, writing and literacy skills to fourth graders at Eisenhower Elementary School; teaching athletic skills an football training techniques to sixth-eighth-graders in the Greater Flint area and tutoring and being a leader for his fellow football teammates at CAHS.

Raised by his great grandmother, Cameron attended Flint Community Schools through his junior year, when he transferred to C-A to finish his senior year. 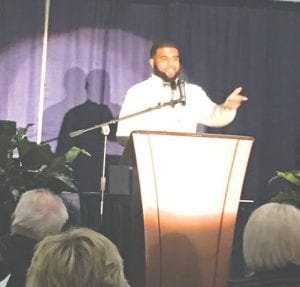 “He has been an outstanding student academically and is a young man of character.,” said CAHS Principal Debbie Davis, in her nomination letter. He has quickly become a respected leader in his class, on his football team, and in the community, she said.

“Winning this award meant the world to me,” Cameron said. “I couldn’t gather the words to express how thankful I was to be recognized for my work in and outside of the classroom. I give all thanks to my mother (Catiera Hill), Grandmother (Renee Hill), and Great Grandmother (Emma Hill) and everyone close to me for shaping me into the young man I am today.:

“All of my resources that I have outside of my immediate family are also the biggest contributors to my success as well. I am blessed to be the winner and I am excited for more of the bigger things I’m going to do to make the world a better place again.”

His nomination letter further praised Cameron for his commitment to youth through mentoring and tutoring.

He has participated in the CEO (Commitment to Excellence & Opportunity) program at The University of Michigan-Flint for the past five years. Through the office of Educational Opportunities Initiative at UM-F, CEO works with middle school and high school students to enhance their college preparedness, increase their self-advocacy through diverse cultural experiences and develop leadership skills through civic engagement.

Through CEO, Cameron has been involved in MAC Scholars (Making a Change) where he goes out to Eisenhower Elementary School in Flint six times per year to work with the 4th graders.

Cameron has also teamed up with former teammates from Flint Southwestern Academy to provide a free football camp for more than one hundred 6th- 8th graders in the Flint area. The Ron Wallace Football Camp ran its first annual event in 2017, with sponsorship by The Mott Foundation and the Crim Fitness Foundation and Cameron plans to continue working for this event.

Cameron has also gained the respect of his varsity football team at CAHS in his first year of play.

Coach Jerry Parker said that Cameron has the highest GPA (3.77) on the varsity team and was named All-Academic Team for the Saginaw Valley League for football as well as receiving Honorable Mention.

Cameron tutors his fellow teammates, including junior varsity and freshmen players, to support them with their academics, as well as assisting them with strength training in the weight room.

Cameron will participate on the Varsity Track team in the spring. He also volunteers with his coach/trainer/mentor, Tiger Maxwell, to do community cleanup to make Genesee County a great place to live.

After graduation, Cameron plans to attend either The University of Michigan or Michigan State University to study Sports Communication.