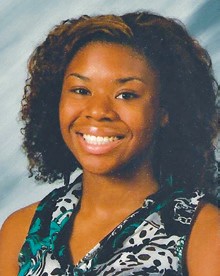 FLINT TWP. — Randi Richardson, a sophomore at Carman-Ainsworth High School, has been selected as a National Youth Correspondent to the 2014 Washington Journalism and Media Conference at George Mason University, July 13-July 18.

Randi is among a select group of outstanding student leaders from all over the country chosen to participate in a oneweek intensive study of journalism and media that is intended to encourage and inspire them to pursue journalism careers.

Randi was chosen based on her academic accomplishments and a demonstrated interest and excellence in journalism and media studies, according to a press release.

National Youth Correspondents participate in hands-on, experiential learning through decision-making simulations that challenge them to solve problems in journalism and media. Presenters will include prominent journalists, CEOs of major media outlets, researchers, and recent college graduates successfully entering the field.

“I was happy to get accepted to participate in the conference,” Randi said in a statement. “I don’t see it as an award. I see it as the first stair step in a staircase that leads to my future career.”

Randi aspires to a career as a sports broadcaster because it weds two things she loves — basketball and sharing information, she said.

She is enrolled in the broadcasting/journalism class at CAHS which she credits with providing a foundation in editing, filming, interviewing and hosting skills.

She is a Student Council representative, member of the CAHS Debate team, and the girl’s varsity basketball team captain. She holds a 3.99 grade point average.

Randi credits her parents, Dr. Recco and Rene Richardson, with playing a big role in motivating her to do well in life. Dr. Richardson is a former C-A school board member.