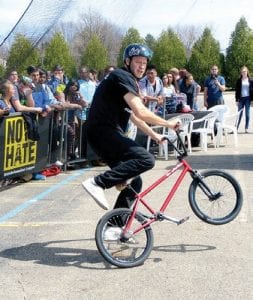 FLINT TWP. — Students at Carman-Ainsworth High School watched performances by some of the most successful ESPN X Games extreme sports athletes at an anti-bullying program staged Tuesday in the school parking lot.

Sponsored by ASA Entertainment, the U.S. Marines Corps and the Anti- Defamation League “No Place for Hate” initiative, the no-cost-to-schools program is designed to deliver a peer-topeer message about bullying while entertaining students with awesome feats by top skateboarding and BMX pros on an outdoor half-pipe ramp.

CAHS was the second stop for the four-week ASA High School spring tour, which kicked off in Lansing on Monday and will end in mid- May for a summer hiatus then resume in August for the rest of the year. Since 2000, the ASA High School Tour has visited more than 1,500 schools nationwide.

Dustin Grice, a BMX pro rider and the ASA Tour master of ceremonies, cautioned CAHS students to pay close attention to his anti-bullying message because there would be quiz afterwards and a chance to win prizes. 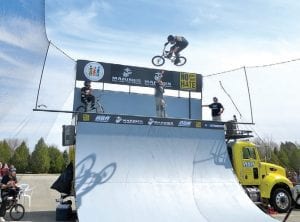 •There are 2.1 million bullies identified nationwide and 2.7 million victims

•70.6 percent of young people say they have witnessed bullying in their school and 20 percent of U.S. students in grades 9-12 have experienced bullying

•160,000 students stay home from school every day because of fear of bullying and one in 10 drop out because of it.

•4,500 students commit suicide each year because of bullying, the third leading cause of death among young people

Grice defined three forms of bullying -physical, verbal and cyber – and told students to tell somebody if they experience or witness examples such as racial slurs, name-calling, spreading false rumors, physical assaults and sending hateful or threatening text messages.

He told the students to think of themselves as a bike chain – altogether they stand strong but one weak link weakens the entire chain, the school and the community

“Love yourself,’’ he said. “You have the ability to put an end to bullying.”

Grice also introduced the performers and gave detail about their background before they took to the ramp to perform tricks including 11-foot high twirls and spins in mid-air. One of the performers, Trevor Meyer, is a highly decorated “flatland” athlete who did his bike tricks at ground level. Other performers were skateboarders Nolan Munroe and Eito Yasutoko and BMX riders Zach Newman and Jimmy Walker.

CAHS students were able to meet the athletes and get autographs after the show.

The second part of the rally, provided by the Marines, was a pull-up contest on an exercise bar. A new tour record of 40 pull-ups was set they day before during the opening event at Lansing High School, topping an old record of 37, Grice said. Several CAHS students took a shot at beating that record but the best effort was about 20. A girls’ challenge to simply hang from the bar for several minutes also drew a few contenders. The tour record is 124 seconds.