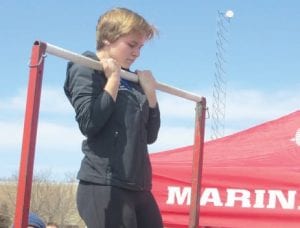 Right, the few, the proud … a few girls stepped up to take the Marine fitness hang test.

In partnership with the Marines and the Anti-Defamation League, ASA Entertainment visits schools nationwide to deliver an antibullying message as part of their “No Place for Hate,’’ campaign.

The Marine challenge is mixed in with the entertainment part of the program, which was set up in the parking lot at CAHS.

Students and teachers got a sample of the rigorous Marines Physical Fitness Test (PFT) that real Marines must pass every year. The PFT includes three challenges – pullups (flexed arm hangs for females), abdominal crunches and a three-mile run, according to www.miligtary.com.

Only the pull-up/hang test was offered at the anti-bullying event. CAHS male students were invited to try to top the tour record of 40 pullups that had just been set the previous day at Lansing High School. In the Marines actual test, only 20 are required to pass the test, according to military.com. 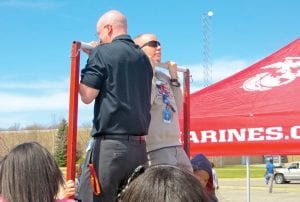 Tom Klee and Benjy Jones – challenged each other to prove that they can hang during Marine fitness test offered at CAHS event. Left, well-muscled, athletic young men learned that doing 20 pull-ups is no easy feat in the Marines physical fitness test.

Many well-muscled CAHS lads took a shot at the record on the exercise bar. A few young ladies also stepped up to try the flexed arm hang. The ASA tour record is 124 seconds but only 70 seconds a required to pass the Marines test.

Neither upper-body strength challenge is easy, judging by the grunts, groans and pained facial expressions made by CAHS students and teachers who took the test. 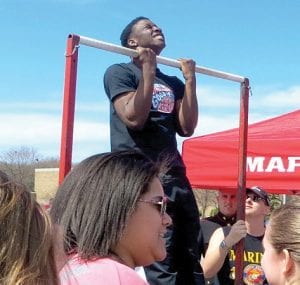