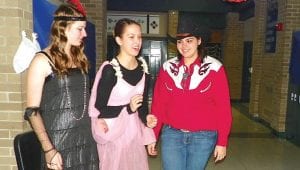 Above: Drama club members Alysia Greig and Emily Bodine and Amanda Adams hand out candy in the haunted halls of CAHS. Right: A trick or treater at Trick or Treat So Kids Can Eat sponsored by the CAHS Drama Club

FLINT TWP. — Their expertise with costumes, props and setting scenes was put to good use by the Carman-Ainsworth High School Drama Club and Thespian Troupe 1360 who hosted a Halloween fundraiser Saturday to benefit the Food Bank of Eastern Michigan.

Trick or Treat So Kids Can Eat is a national community service initiative spearheaded about ten years ago by the International Thespian Society to provide a way for drama clubs to give back to the community, said DeLynne Miller, CAHS theater director.

It was Carman-Ainsworth’s third time hosting the benefit which it resumed last year after a one-year hiatus.

“Last year we had 75 kids come through, this year we’re over 100,’’ Miller said about halfway through the two-hour event.

“We’re just glad we can help the local food bank and provide a fun afternoon for kids.”

Dark, unlit hallways served as a backdrop for the ghosts, goblins and spooky decorations greeting the costumed youngsters who attended the event. 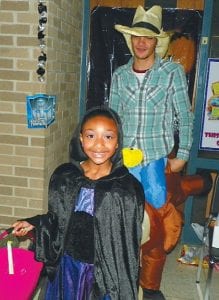 Costumed drama students waited in the darkened doorways along the hallways to hand out candy – most of which they contributed themselves.

A maze of yellow-draped tables at the entrance to the event led to a room where materials for crafts and snacks were waiting. The exit wound through the darkened hallways draped with spider webs, tombstones and other spooktacular props.

Mixed among the spooky stuff were hints of upcoming Drama Club events. A glittery poster depicted the upcoming presentation of “Cinderella’’ later this month. And a yellow brick road as the end of the show was a lead-in to the Spring presentation of the “Wizard of OZ’’ coming in March.

Miller said the self-supporting theater department paid for everything because they wanted all money raised from the $2 admission to go to the food bank.

Pointing out that “hunger is a very scary thing,’’ the International Thespian Society set a goal this year for participating troupes to collect 375,000 pounds of food. Last year, with 320 troupes participating, the food drive collected more than 350,000 pounds.