Call of the Wildlife 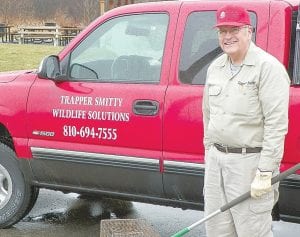 SWARTZ CREEK — Not many service people can climb into your attic to trap a bat and come out with a professional assessment of your faulty wiring too.

Nowadays Richard C. Smith makes his living as a pest removal expert but he was a home inspector and appraiser before the real estate market tanked in 2005. So its second nature for him to look for structural and electrical problems while rooting around in attics for squirrels, bats, raccoons, birds and other home invasive pests.

When Smith says he has some wild stories to tell, he’s not kidding. He’ll be sharing some of them as the featured speaker at 10 a.m. April 20 at the Swartz Creek Area Senior Center, 8095 Civic Drive.

There’s the one about the attacking blackbirds in the diabetics closet. The visiting raccoon in the basement of a vacationing minister that was dining on the cat’s food kindly provided daily by a neighbor. The hard-headed dog that gets sprayed by a skunk two or three times a year. And the one about the homeowners who watched a bear circle the house to tear down all their bird feeders and dine on the seed.

“I really have a good time when I go out to speak” Smith said, adding that some groups ask for an outline of his talk and references to avoid controversial topics. He’s been assaulted by an animal-rights advocate.

As a marketing tool, Smith offers his talks to many groups including Lions clubs, Rotary, Optimists, churches, senior centers and even women’s groups.

Smith, 63, said he’s been a trapper for more than 50 years, long before he took it up as a living. He faces the unknown on every job because animals have minds of their own.

“It’s like a police officer going into a house after a burglar,” he said.

He’s been bitten by trapped animals and sprayed by a skunk.

But he’s rigged up and ready for the coming busy season as animals slowly come out of hibernation after a colder winter.

Smith’s not on 24-hour call but he answers the phone from about 6 a.m. until about 9 p.m when the drunken pranksters start calling about rhinoceroses and alligators because they think its funny, he said.

For example, if you live in the Fenton or Holly areas and see a rattlesnake, Smith can’t kill it and neither can you. Ditto for those Canadian geese crapping all over your patio furniture.

Outside of protected species. Smith said diseased animals need to be euthanized to avoid spreading it.

“It really is a big business. There’s a need or it,” Smith said of his services. In his adventures, he’s ventured much further than attics to the wilds of Wyoming, Montana, Arizona and Colorado to trap bobcats and coyotes.

“I’ve encountered most of the wildlife in North America,” he said, mentioning a wolverine, mountain lion and wolf among them.

He’s studied with Johnny Thorpe, a nationally-known professional trapper, and also wrote a book about him. Smith has also written a book about home buying and several books about trapping wildlife. He’s also taught at the Trapper’s College in Colorado and other places around the country.