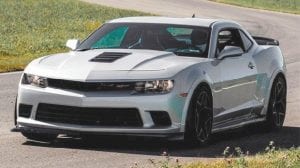 It’s been said a good car can “run rings” around the competition.

That certainly was the case in mid- September when the 2014 Camaro Z/28 turned in a 7:37.40 lap time around the famed Nürburgring road course in Germany.

Chevrolet officials, on Oct. 15, revealed a video of the new 2014 Camaro Z/28 lapping the Nürburgring road course in a time comparable with some of the world’s most prestigious sports cars, said GM spokesman Monte Doran.

The Z/28’s lap is four seconds faster than the Camaro ZL1, and beats published times for the Porsche 911 Carrera S and the Lamborghini Murcielago LP640, Doran said.

The Z/28’s lap was completed in lessthan ideal conditions, with damp pavement and pouring rain near the end of the run.

“Adam Dean, the development driver for Z/28, did a heroic job driving in deteriorating conditions. Based on telemetry data from our test sessions, we know the Z/28 can be as much as six seconds faster on a dry track,” said Al Oppenheiser, Camaro chief engineer.

The heart of the Z/28 is the 7.0L LS7 engine, Doran said. The LS7 uses lightweight, racing-proven, high-performance components, such as titanium intake valves and connecting rods, CNC-ported aluminum cylinder heads and a forged-steel crankshaft to help produce an SAE-certified 505 horsepower and 481 lb.-ft. of torque. Air-conditioning is available, but only as an option.

The team spent a week at the Nürburgring as part of the Z/28’s performance validation regimen, accumulating a total of 10 hours and nearly 1,000 miles on the track. Each lap took less than eight minutes to complete, despite having to overtake slower traffic at times, Doran said.

“Today’s test pushes the car harder than the vast majority of customers ever will. As a result, when we call a car ‘track capable,’ we are confident that it will perform reliably and consistently for our customers,” said Wayne McConnell, director of Global Vehicle Performance.