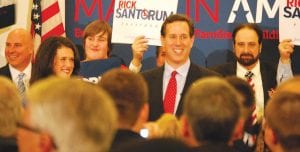 CAMPAIGN STOP — Rick Santorum, Republican candidate for the presidential nomination, stopped in Flint Township at Applebees on Miller Road earlier in the day Feb. 26, then at this stop in Davison Township at Colonial Valley Suites to rally a group of about 300 supporters before Tuesday’s primary election. Santorum spoke on several subjects and urged supporters to get out and vote for him in the primary. He lost in Genesee County and overall in the state to Mitt Romney.