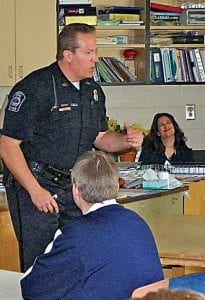 He’s a liaison officer assigned to keep the peace in schools but also handles most juvenile cases for the police department.

Sometimes he’s an evidence technician working crime scenes to help figure out what happened. As an accident investigator, Szmansky gathers information to figure out who’s at fault.

Rosemary Thiebaut is a different kind of detective.

“As a naturalist (at For-mar Nature Preserve), I am a nature detective,’’ Thiebaut said, explaining that animals usually don’t stick around to be examined so she has to look for clues such as tracks, droppings, feathers or the home left behind.

From the business sphere, Sarah Didilus dispelled the notion that working at McDonald’s is a dead-end job. As a manager earning upwards of $40,000 a year she also travels at the company expense, among other perks.

Szmansky, Thiebaut and Didilus were among 13 presenters last Wednesday at the 5th annual Career Fair for eighthgraders at Carman-Ainsworth Middle School.

Students chose which four sessions they wanted to attend.

Szmansky who has worked in law enforcement 17 years including about ten in Swartz Creek, said he likes talking to students about police work because he’d welcome more young people in the field. But he also shared that a police officer needs to be disciplined and selfless.

A police officer technically is always on duty and willing to uphold the law.

“If I see a crime being committed, even if I am with my kids, they already know the routine, they know where to go and how to get away from me if I have to address something that is going on,’’ he told the students.

Szmansky fielded typical questions about his salary and his gun and taser.

He explained that his weapons are not toys for demonstration but those who earn the right to carry them can expect to earn from $32,000 to $110,000 a year depending on where they work. Szmansky said he makes a good living with benefits and feels he is serving a greater purpose. He has saved lives and rescued people from exploding cars, he said.

He also explained that some college is needed to get into the police academy and about five years of law enforcement experience needed prior to working in specialty branches such as the CIA, FBI or Secret Service.

In her presentation, Thiebaut helped students play nature detective using clues to identify items she brought for show and tell. Those included an albino garter snake; a cecropia moth that has a fiveinch wing span and emerges from its cocoon without a mouth or digestive system because it lives only long enough to mate (about 10 days); soft pelts from a cougar and lynx; and a stuffed porcupine whose quills remain prickly enough to draw blood.

Students asked questions about taxidermy and the porcupine’s defense system when it was alive.

Thiebaut also talked about outdoor activities at For-mar and informed students interested in becoming naturalists that they can apply for jobs with the parks system as early as age 16.