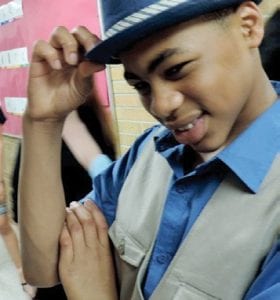 Austin Bishop strikes a Michael Jackson pose backstage after his rousing performance on stage of “I Want You Back.”

Fourteen acts took to the stage to the delight of parents, peers and others in the audience.

Austin Bishop, a sixth grader had the audience dancing in their seats and clapping along to his rendition of Michael Jackson’s “I Want You Back.”

Austin said he became a fan of Jackson’s by listening to CDs owned by his parents and grandparents.

Trinity Tate, an eighth grader, opened the show with her piano performance of “Love Me Like You Do.’’ She’s been playing piano since age four and chose that song because it is one of her favorites. She enjoys playing piano but is more interested in becoming an actress when she grows up, she said. 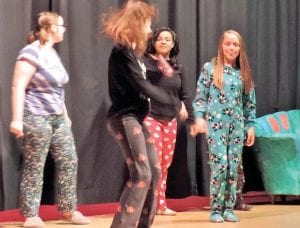 Mattison Miller (far right) joined her friends on stage for a fun performance of Taylor Swift’s “I Shake it Off.”

Nikki Jones, a seventh grader, evoked a young Nikki Minaj in her rap performance. Jones said she’s been rapping for a couple of years because she’s a fast talker but it’s just a fun hobby for her.

Ardeija Bunch, an eighth grader sang “Beautiful” by Christina Aguilera to inspire others.

“A lot of people beat themselves up because they think they are not beautiful,’’ she said. “They are beautiful in their own way.”

Hannah Arnold, a seventh grader, sang “Someone Like You” because it inspires her and reminds her of her family. She has five older sisters and three older brothers, so she works at standing out from the crowd, she said. She’s undecided on whether to pursue singing or law as a career.

Makayla Richards, an eighth grader, belted out Whitney Houston’s “I Will Always Love You” because she’s a Houston fan and the song fits her voice. Makayla said she’s performed in several talent shows, including gospel singing, but becoming a professional singer is her backup plan. She wants to become a sports medicine physician. 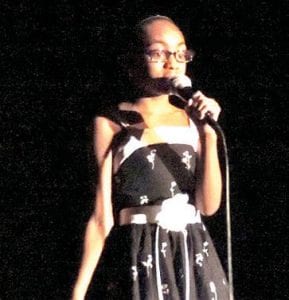 E’Niyiah Leach was introduced as a little lady with a big voice for her performance of “Talking to the Moon.”

Mattison Miller, a 7th grader, danced with several of her friends in a lively rendition of Taylor Swift’s “I Shake It Off.’”

“It was supposed to be funny,” Mattison said of the group’s energetic stage antics.

Other performances include a drum solo, poetry recitations, orchestra instrumentals and interpretive dance.

Rayanne Leach videotaped the show. Samuel Turner, an eighth grader, was the stage manager and other students pitched in with technical, stage preparation and lights.

All DVD sales and proceeds from the show will support the 8th grad graduation celebration and fund future theater events. DVDs of the show are available for purchase at $5. See Sandra Cawood, middle school theater teacher. 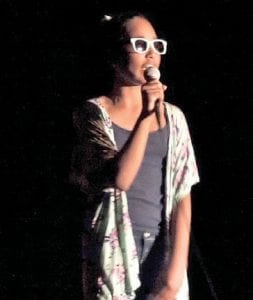 Nikki Jones performed a rap in the CAMS talent show.