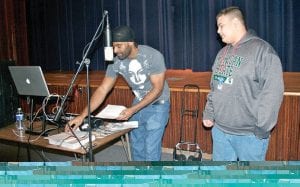 It was McFall’s first time participating, McCombs said. As a business owner, his motivational speech to the students carried the message that not everyone needs a four-year degree to be successful. He invited students to stop by his business for a tour and encouraged them to surround themselves with positive people. He also offered them an opportunity to apply for a summer job. 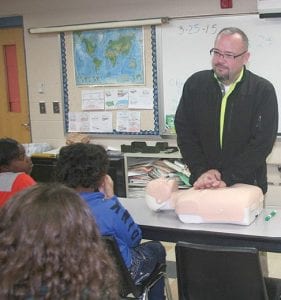 Bangtown Productions & Recordings, a Flint-based music producer, has presented at the Career Fair for several years. This year Mark Taylor guided students through a sample mini-recording session. Bangtown works with many schools in Genesee County and as far away as Kalamazoo, McCombs said. They use music to improve literacy skills.

Nicole Ferguson of Formar Nature Preserve is another recurring presenter. She brings reptiles and other interesting items to interest students in naturalist careers.

Terrance Daniels, another perennial presenter, is from Consumers Energy. This year he added to his presentation information about how the industry is changing and he and fellow engineers have to undergo training to keep up with new technology.

McCombs said students show great appreciation for the speakers. Presenters also provide feedback on how enthusiastic and well behaved the students are, she said.

“We are so proud of our students and the way they treat the professionals that come here,” she said. — Rhonda Sanders