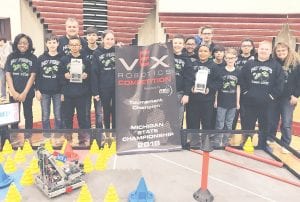 C-AMS VEX team MO” Peeps won the state championship for the second year in a row.

FLINT TWP. — For the second year in a row, Mo’ Peeps, the VEX robotics team at Carman-Ainsworth Middle School, has won the state championship and earned the right to compete at the World Championship April 25-28. in Louisville, Kentucky.

MO’ Peeps shared the state championship title with alliance partner, the Steel Pigeons of Cranbrook Schools in Bloomfield Hills. The game is played in alliances teams of two against two.

Of 28 teams competing in the Michigan State Championship on Feb. 25, six earned the right to move on to the World Championship, said Leanne Welch, MO’ Peeps coach. Two of those six Michigan teams are from Carman- Ainsworth. Ainsworth.

Team 1375A won the state championship and team 1375C won the Robot Skills Award. Both wins qualified them for the World tournament.

The VEX competition season started last April when the 2017/2018 game was announced called “In the Zone”. It challenged students to build and program a robot able to move four mobile goals into scoring zones as well as stack multiple plastic cones on various scoring elements. First, students must program their robot to operate autonomously for a 15 second period. That is followed by a 1 minute 45 second driver mode. Teams are scored based on how many scoring elements they are able to move into scoring zones throughout this period.

Alliance teams are randomly placed with and against each other during the qualification matches.

Robot Skills is an additional side competition in which all teams participate. It requires students to program the robot to autonomously score points for a one-minute time period then during a one-minute drive mode segment. Teams are allowed to try each of these modes 3 times. Their best from each category is used for their final score. Mo’ Peep’s Team 1375 C score of 132 was the highest in this competition, netting the Robot Skills Award.

Now preparing for the World competition, the team is seeking public support to help finance their trip. Hoping to raise $6,000 by April 11, a gofundme page has been set up at https:// www.gofundme.com/mo-peeps-are-going-toworlds

Most of the donated funds will be used for robotic materials but also are needed to help cover costs for travel, boarding, food, and maybe a little fun, if time allows, during the five- day event, Welch said. Robot motors each cost $20 and 40 are needed ($800) The cortex (computers) of the robots are $250 each and four are needed ($1000). Those are just some of the bigger items needed in addition to costs such as nuts and bolts. Anything can go wrong with robots during competition and the students need to be prepared with spare parts to fix them.

They have competed against both high school and middle school teams earning the State Championship, a State Skills Champion award, nine Tournament Champion awards and four Tournament Finalist Awards. They also have earned awards in Excellence, Design, Robot Skills, and Judges and hosted their own tournament this season.