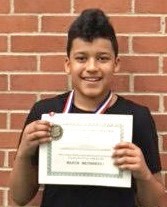 Congratulations to Malaki Edwards, a middle school sixth-grader who represented the district well at “March Mathness” a math competition hosted by Delta College.

FLINT TWP. — Kala has 5 classical CDs, 4 jazz CDs, and 11 rock CDs. If she randomly selects one CD from her collection to play, what is the probability that it is a classical CD?

Congratulations if you have the math smarts to answer questions like this sample one posed to middle school students last month during the Annual Delta College Middle School Mathematics Competition.

Malaki Edwards, a sixth-grader at Carman-Ainsworth Middle School was one of about 400 middle school students invited to participate in the one-day event. They represented 27 area schools, including the counties of Bay, Midland, Saginaw, Isabella, Gratiot, Shiawassee, Genesee, Tuscola, Lapeer, St. Clair, Huron, Clare and Detroit. Malaki placed in the top 25 among sixth-graders.

Titled March Mathness, a reference to the college basketball finals taking place, the math competition consisted of individual tests taken by the middle school students. Students competed for prizes, medals, and trophies. Awards were given to the top 25-30 students at each grade level at an awards ceremony held in Delta’s gym.

The Middle School Math Competition is one of a variety of learning activities coordinated within the Delta College STEM Talent Institute. From skilled trades to multiple health degrees, 128 of Delta’s 150 certificate or degree programs are STEM related. The STEM Talent Institute focuses on strengthening technical skills needed in the economy, with work being driven by employer demand.

The Delta College Mathematics Division has been hosting the Middle School Mathematics Competition each spring since 1997. The competition is open to area sixth, seventh, and eighth grade students. Each school chooses the students that will compete by a variety of methods. Many schools use the practice test provided by Delta in the fall of each academic year to aid in this selection. Because this is a regional event, it is limited to students in the Mid-Michigan area.

The top 25-30 winners from each grade are listed on the competition webpage at www.delta.edu/math/middleschoolmathcompetition/2016-winners.aspx — Rhonda Sanders