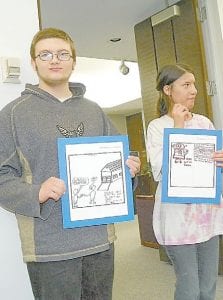 FLINT TWP. — Bailey Rousseau, an eighth-grade whiz kid at Carman- Ainsworth Middle School recently scored 29 out of a perfect 36 on the ACT test. He was among several student achievers singled out for special recognition at the school board meeting last week.

Kevin Sumney, CAMS principal, described Bailey as an all-A student who is taking geometry for high school credit. Bailey has not chosen a college yet but is thinking of becoming a physicist, Sumney said.

He said Bailey also received a HATS Off award at Michigan State University on May 14 in recognition of his “phenomenal’’ ACT score. He was among 207 students statewide, invited with their parents, to the 13th annual recognition ceremony where they were presented with a certificate of achievement and a medal, said Kathee McDonald, director, Office of Gifted and Talented Education at MSU, a division of the MSU Honors College. The qualifying score this year for the ACT was 28, she said. 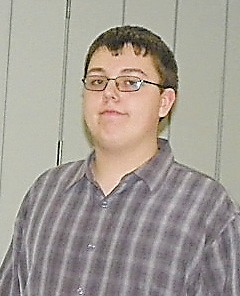 Bailey Rousseau, an 8th grader at CAMS, scored 29 on ACT.

HATS Off honors the top 200 high-scoring students in grades 6, 7, 8 and who took the SAT or ACT during the current school year. Most students generally take the ACT test in their junior and/or senior year.

C-A Superintendent Bill Haley praised Bailey’s achievement and said he was on track for a perfect score by his senior year.

The board also recognized students who participated in the Very Special Arts pro- gram which promotes arts education and creative expression for children and adults with disabilities.

“VSA is a sister to Special Olympics,’’ said Kathy Cole, program coordinator for VSA-Genesee County. VSA recruits professional artists such as Randy Zimmerman, a cartoonist, who worked with the students to create cartoons focused on the topics of Respect, Responsibility or Safety. Samples of cartoons created by the students were shown to school board members. Cole said she has 12 artists in 10 schools and 35 classrooms in Genesee County.

Michael Stewart, a high school history teacher, introduced three of six students who participated in a three-day Model UN conference at MSU March 25-27. Now it its 11th year, the conference draws high school student delegates from statewide to participate in UN-type discussions. C-A was one of the smallest but most diverse delegations, Stewart said. The students were assigned to committees to solve the world’s problems.

“Not knowing what to expect, I was blown away,’’ Stewart said of his observations. “They were negotiating and forming alliances. It was pretty great to watch.’’ C-A students summarized their activities for the school board and said they learned a lot from the experience.

Angela Swain won gold medals at regionals and state levels in the medical writing category on the topics Childhood Obesity and Cosmetic Surgery in Teens.

Galal Galal won bronze medals at regionals and state in the concepts in health care category.

Erick Skaff, Kelsey Christensen and Mujtaba Syed were participants in the Public Service announcement team event whose video “Prescription Sunshine” won a gold medal at regionals and was a finalist at the state level.

More than 500 students competed in 30 events at regional competition in Bay City in January, Confer said. The State Conference was held in Traverse City on April 14-16, 2011. Medalists/finalists from 8 regionals around the state competed. Over 1500 students attended.