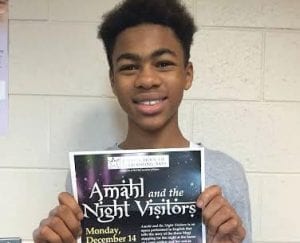 Melvin A. Bishop, a seventh grader at CAMS, has the lead role in this year’s performance of “Amahl and the Night Visitors.

FLINT TWP. — Melvin A. Bishop, a seventh grader at Carman-Ainsworth Middle School, has the lead role in the Flint School of Performing Arts production of “Amahl and the Night Visitors.”

It is a one-act opera performed in English that tells the story of the three Magi, stopping for the night at the home of a poor widow and her disabled son, as they travel to Bethlehem to present gifts to the newborn Christ Child.

Sponsored by the Ruth Mott Foundation, admission is free for all performances. The play will take place in the MacArthur Recital Hall at the Flint Institute of Music, 1025 East Kearsley Street.

Composed by Gian Carlo Menotti, “Amahl” was the first opera written for American television and was first broadcast on December 24, 1951 by NBC.