CAMS students being recognized for good behavior and more 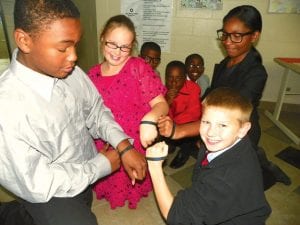 They were among several sixth-grade students who stepped up to the challenge of CAMS first schoolwide Paths to Success Day, which will be held every Monday for the rest of the school year.

“The point of the day is to emphasize successful dress and attitudes,” said Wendy McCombs, a CAMS counselor.

It is one of several initiatives spearheaded by CAMS’ Positive Behavior Support (PBS) committee which is devoted to recognizing and supporting positive student behavior, she said.

Dressing for success was combined with Positive Blue Slip Day and another new program this year called BK2E (which in abbreviated text message-style lingo stands for Be Kind to Everyone).

On Paths to Success Day, students will be recognized for exhibiting positive behavior and also for participating by dressing nicely and wearing their BK2E wrist bands they were given at the beginning of the school year when the initiative was introduced.

CAMS staff hands out blue slips to students who demonstrate successful attitudes through their dress, actions and attitudes.

Positive Blue slips are put in a drawing where students win weekly prizes.

The initiative started at the middle school about eight years ago and has now been adopted districtwide.

The new BK2E initiative was brought to the school by PBS committee member Sue Miller who got the idea at a conference she attended. She then wrote a successful grant to the Rotary Club and used the funding to purchase BK2E wrist bands for all students.

After receiving the wrist bands at the beginning of the year and being told what BK2E is about, students brainstormed ways to be kind and made a pledge to BK2E, McCombs said.

BK2E reminders are posted in the hallways.

It’s too soon to measure BK2E’s effectiveness but CA-ROCKS and positive blue slips have had a positive affect on CAMS students, McCombs said, citing a 33 percent decrease in behavior referrals since PBS initiatives were launched about four years ago.

The Positive Behavior Support committee also rewards students throughout the school year with various celebrations including a No Tardy Celebration, Perfect Attendance Celebration and a No Behavior Referral Celebration, McCombs said.

The purpose is to give positive attention to students who meet CA-ROCKS expectations.