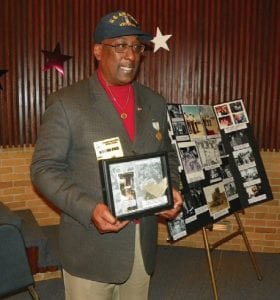 FLINT TWP. — On April 4, 1975, during the fall of Saigon in South Vietnam, a military transport plane lifted off from the war-torn country. It was carrying 250 orphaned children in the start of an evacuation mission ordered by President Gerald Ford known as “Operation Babylift.”

About 15 minutes later, the plane crashed, killing 138 people aboard including 78 children, 35 military officers and 11 crew members.

Among the survivors was Sgt. Phillip R. Wise, of Flint, an U.S. Air Force medical technician with five years of service, who was just three weeks past his 23rd birthday.

“I call it my second birthday,” said Wise, now 60, who shared his memories of that tragic day at a Veteran’s Celebration Program last week, hosted by the YouthQuest Advisory Council at Carman-Ainsworth Middle School.

The students watched a documentary account by ABC’s 20/20 , including an interview with Wise, that was produced about nine years after the tragic crash. After the viewing, Wise gave his personal testimony and answered questions.

Wise told the students the plane was about 10 minutes into the flight when he heard a loud boom. The locks failed on the rear cargo doors on the lower deck of the plane and they blew off sucking out everything and all but one passenger inside.

Wise was saved by his leg becoming entangled in overhead wires. He recalled a glimpse of blue skies and clouds, and gasping for air before quickly losing as oxygen was depleted in the decompressed compartment.

When he woke up in a military hospital two days later, he was told that he had been found in the wreckage because rescuers spotted his white medic’s shirt.

Rescuers found him hanging upside down by his leg, with his head and chest laid open and many wounds exposed to bacteria in the muddy rice paddy water where the plane crash landed.

Wise said his head injury was the worst of it.

But six months and six surgeries later, he was on the road to a miraculous full recovery and living a full life.

A year after the crash, Wise told the students he overcame his fear of flying by quietly taking a flight on same kind of aircraft he had crashed on.

After a medical discharge with full honors, he did not talk about his experiences for nine years until the 20/20 interview. He’s maintained contact with other flight survivors and last month self-published a book, “Fragile Cargo: Operation Babylift,” giving his account of his life on and since that fateful day he calls his second birthday.

Operation Babylift went on to evacuate more than 3,000 orphans from South Vietnam including crash survivors from that tragic first flight.

Wise was part of that first historic crew who walked away with haunting memories and a profound appreciation for the miracle of life.

Wise told the CAMS students they may encounter serious challenges as they go through life but hoped his story would serve as an inspiration.

“I had a second chance,’ he said. “Just remember that life is a gift and every day that you wake up is a gift.”

The students asked Wise questions about his injuries, his military and educational background and why he joined the military.

Wise said he enlisted at age 18 because he wanted to serve his country and became a medic because he liked taking care of people.

Adrienne Smith, YouthQuest, site team leader at CAMS, said that Wise’s presentation was the culminating event of a service learning project for the students that has included writing letters to veterans.