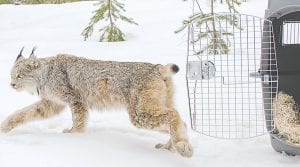 With a casual glance or two back, a Canada lynx left its holding carrier in under a minute Friday and trotted off over the snow into a stand of pine trees in central Schoolcraft County.

The lynx had been brought north to be released in a cooperative venture by the Michigan Department of Natural Resources and the Detroit Zoological Society.

“It went perfectly,” said John DePue, a DNR wildlife biologist who supervised the release of the cat. “She didn’t dart out of the carrier like some other animals would have, but that’s pretty typical lynx behavior.”

The lynx – an animal only rarely seen in Michigan – had been making headlines since it was discovered about a month earlier on a farm in Sanilac County.

The DNR received a report on March 16 of a possible lynx preying on a farmer’s domestic geese. The lynx was described as easily approachable and wasn’t spooked by the farmer’s presence.

From photos provided, DNR staffers verified it was indeed a Canada lynx.

Because the animal had been behaving oddly – including being easily approachable –the DNR, in cooperation with the U.S. Fish and Wildlife Service, worked with a local trapper to capture the lynx to evaluate its health.

A female Canada lynx looks through the bars of her wildlife carrier just prior to her release.

The lynx was held at the Howell Nature Center wildlife rehabilitation facility in Livingston County until she was able to be transferred to the Detroit Zoological Society for a health assessment.

The female cat, believed to be less than a year old, measured just over 4 feet long and weighed 18 pounds. She was treated for a foot wound, parasites and dehydration.

“The lynx was well-cared for while at our facility,” said Randi Meyerson, deputy chief life sciences officer at the Detroit Zoological Society. “We were happy to play a role in restoring her to good health so she could be returned to the wild.”

DNR wildlife biologist Cody Norton said the lynx gained more than a pound, eating rabbits and quail while under the care of Detroit Zoological Society staffers. The cat was transported north about 400 miles before a small group of DNR staffers released her into the wild.

“It’s been acting like a normal healthy cat,” Norton said.

DePue and Norton worked the mechanism on the carrier door to release the cat. The door swung open. The lynx stepped cautiously out of the carrier and looked behind at the two biologists before walking away in the opposite direction.

A Canada lynx moves from her wildlife carrier into the wilds of Schoolcraft County.

A blood sample from the lynx had been submitted to the U.S. Forest Service’s National Genomics Center for Wildlife and Fish Conservation in Missoula, Montana for DNA analysis.

“The DNA of this lynx is consistent with DNA from lynx in the Great Lakes region of the U.S. and Canada,” said Kristy Pilgrim, laboratory supervisor at the center.

Canada lynx are found in boreal spruce-fir forests in the northern portions of North America, mainly in Canada and Alaska. While lynx do not usually occur in Michigan, the occasional dispersing individual could move through the state.

“Lynx are more likely to be seen in the Upper Peninsula, with the most recent verified sighting on Sugar Island in 2010,” Kennedy said.

The location where the lynx was released has good habitat and abundant food sources, such as snowshoe hare and beaver. This location is also remote and has large contiguous blocks of public lands and little human development.

For more information on wildlife in Michigan, visit Michigan.gov/Wildlife.