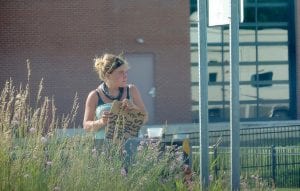 The I-75 exit ramp at Miller Road has been a regular spot for panhandlers for quite some time but in recent months the practice has spread to other corners throughout the township.

FLINT TWP. — Street beggars and charities that would be affected by the township’s pending Begging and Soliciting Ordinance got a reprieve Monday. The township board meeting was canceled due to lack of a quorum.

Four members of the seven-person board were absent or on vacation. Agenda items included the begging ordnance, which, if approved, will ban soliciting from motorists in traffic among other specified locations.

Panhandling, especially on highly visible township street corners and at freeway exits, has become a growing problem in the township.

Police officers are no longer able to enforce a long-standing vagrant and panhandling ordinance after a 2012 U.S. District Court judge ruled that public panhandling is a form of free speech and cannot be treated differently than other charities seeking public donations.

Township attorney Peter Goodstein researched ways that other municipalities are dealing with this issue and recommended an ordinance passed in the city of Kentwood in Kent County that has withstood a legal test. A judge ruled that an ordinance banning soliciting from vehicles, in the interest of public safety, does not violate rights as long as it applies equally to everyone including charities.

The Old Newsboys, which conducts an annual street drive to provide Christmas gifts for needy children, is one of the better-known charities that would be affected by the traffic ban.

The ordinance also would place new restrictions on soliciting near other public places including within 15 feet of a bus stop, ATM machine or pay phone.

The proposed ordinance can be read in its entirety on the township’s website at www.flinttownship.org It passed first reading on July 7 and was due for second reading and possibly adoption at the board’s July 21 meeting.

As of Monday afternoon, a spokesperson in the township clerk’s office said it was not known if the board would schedule a special meeting or wait until its next regularly scheduled meeting at 7 p.m. on Aug. 11.