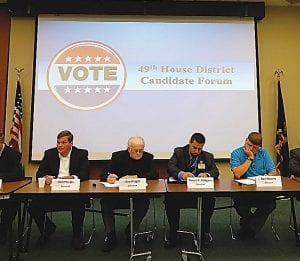 Candidates for state representative for the 49th district gathered Tuesday night to share their views during a public forum at the GISD Davis Education Center. Six Democrats, two Republicans and one Libertarian are running for the office.

FLINT TWP. — Voters go to the polls Tuesday to select primary candidates who will face-off in November for the job of state representative for the 49th district.

Nearly a “full house” turned out Tuesday night for a forum to hear the candidates views on issues including public education reform and funding, Medicaid expansion, transportation and roads improvement, attracting new businesses and jobs creation.

The forum was co-sponsored by the Genesee County Association of School Board Members, the Flint and Genesee Chamber of Commerce, the League of Women Voters-Flint Area, the Michigan Municipal League, the University of Michigan-Flint, and the West Flint Business Association. It was held at the GISD Davis Education Center, 2413 West Maple Avenue.

Six Democrats, two Republicans and one Libertarian are running for the office that was vacated in May when Jim Ananich was elected state senator.

The Republican candidates are Patrick Duvendeck, 64, of Flushing and Don Pfeiffer, 40, of Flint. Pfeiffer did not attend the forum due to a family obligation.

Libertarian Patrick Clawson, a latecomer, said his name will not appear on Tuesday’s ballot, but will be on the November ballot.

He described himself as a watchdog protecting public interest. He was raised in Flint and graduated from Clio High School before leaving the area for many years for a career in broadcasting and is now a private investigator and process server.

The forum format, moderated by Jerry D. Johnson, GISD executive director of communications and development, allowed each candidate to make a three-minute opening statement and a two-minute closing statement to provide information about their background and platform issues.

Then each answered two of 16 randomly assigned questions from a list that each candidate except Clawson received prior to the forum. Some candidates said they would post their responses to all of the questions on their websites.

The League of Women Voters has also posted on its website responses from the candidates to questions regarding improving quality of life for Genesee County residents, enhancing public schools and attracting large and small businesses to the state.

Those responses and biographical information about the candidates, with some exceptions, can be found in the LWV Voter’s Guide at lwvflintarea.org/files/LWVFAVote rGuideAug2013.pdf.