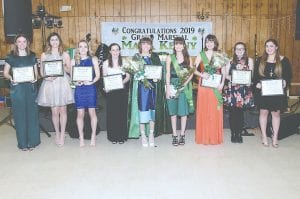 FLINT — The local chapter of the Ancient Order of Hibernians is planning multiple activities to celebrate St. Patrick’s Day on March 17, with the top selections for Miss Hibernia all coming from suburban Catholic parishes.

That will be followed at 12:02 p.m. with Mass presided over by Bishop Earl Boyea of the Diocese of Lansing, a wreath-laying ceremony at McFarlan Park in downtown Flint, a four-mile road race starting and finishing at Masonic Temple. 755 S. Saginaw St., and an afternoon party at St. Matthew Catholic Church parish hall.

“We had nine wonderful contestants representing various Catholic parishes through Genesee County compete in the Miss Hibernia contest,” observed John Potbury, selection committee chairman. “We are pleased to have them represent the Ancient Order of Hibernians at area events in coming months.”

Selected as Miss Hibernia of 2019 was Fiona Caughley, 18, a senior at Powers Catholic High School and a member of St. John the Evangelist Church in Fenton. She will receive a $1,500 cash scholarship. She is daughter of Erin and Conor Caughley.

First runner-up in the contest is Shannon McAuliffe, 20, a graduate of Swartz Creek High School and now attending Oakland University. She is a member of St. Joseph Church, Gaines, and will receive a $1,000 cash scholarship. She is daughter of Catherine and Thomas McAuliffe.

Second runner-up is Brigid Cassady, 18, a senior at St. Thomas More Academy, Burton. She is a member of St. Robert Bellarmine Church in Flushing and will receive a $500 cash scholarship. She is daughter of Teresa and Timothy Cassady.

Fiona Caughley and her mother will be vocalists at the Mass and sing Irish songs at the party to follow the service. Traditional bagpipe music also will be provided at the Mass.

Miss Hibernia candidates must be of Irish descent, between the ages of 16 and 22, single and never married. They are judged for poise, personality, appearance and an interview by a screening committee.

“The Irish can never do anything on time, try as they might,” laughed Bob Slattery, Jr., president of the Sullivan & O’Sullivan Division of the Ancient Order of Hibernians. He heads the Department of Public Works for the city of Burton and is long-time former mayor of Mt. Morris.

Matthew Kenny, grand marshal of this year’s festivities, said Hibernians will make the four-block walk to McFarlan Park at Saginaw and First Avenue to lay a wreath in honor of deceased Hibernians, especially those who served in the military. Kenny is a physician’s assistant of Midland.

The party at St. Matthew parish hall runs from 1:30 p.m. to 6 p.m. and features Irish food, drink and music. A buffet will be available for $10, which includes chicken and corn beef and cabbage and other items.

The 39th annual Pot O’ Gold run and walk starts at 2 p.m. and passes through the University of Michigan- Flint campus and cultural area before trailing back downtown to the Masonic Temple. A Little Blarney Kids’ Run also is planned.

St. Patrick’s Day celebrates the patron saint of Ireland. The Ancient Order of Hibernians was founded concurrently in the coal-mining region of Pennsylvania and New York City in May 1836. The organization now is in six countries but the American organization is the largest.