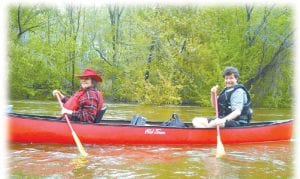 Author and veteran paddler Jeff “Doc” Fletcher was on hand at Mott Community College’s Library to discuss canoeing and kayaking Michigan’s rivers and to even encourage people to take a boat trip down the Flint River.

According to Fletcher, who’s paddled more than 80 rivers in Michigan and Wisconsin, the river that was once polluted and cloudy is now scenic and — in many stretches — rural.

“This river will surprise you,” he said.

Fletcher recommends a river trip for Genesee County residents that begins in Flushing and ends in Montrose. This portion of the river can be covered in four hours and flows for 13 miles.

Fletcher says that the Flint river needs to be “reintroduced to the public” and is highlighting it along with 20 other Michigan rivers in his new book due out in January.

“I can’t wait to share the Flint River with the world,” said Rebecca Fedewa, executive director of The Flint River Watershed Coalition, who calls the waterway “our beautiful corner of the world.”

Up until the mid-2000s recreational use of the river that runs approximately 75 miles from Columbiaville to Saginaw was rare.

Today groups like the Flint River Watershed Coalition and The Flint River Paddlers are set on promoting the river in a positive light.

The Flint River Watershed Coalition, formed in 1997, regularly tests the water quality while clean-ups are arranged multiple times per year. Slowly, the group is eradicating the river of every old tire and leftover piece of junk from an era when businesses didn’t try harder.

“This river is beautiful and it’s right next door,” said Greg Palinski of The Flint River Paddlers.

Palinski said the group is currently focusing on improving canoe launch sites and installing more along the river to provide for more varied day trips.

“I think what’s so great about canoeing is that it’s loved by all ages, the young and the young at heart,” Fletcher says.

He advises beginning paddlers not to get discouraged if their boat tips over and be aware of rising water levels, especially in the spring that can make a river run twice as fast.

“Attitude is everything,” he said.

One of Fletcher’s existing books, “ Weekend Canoeing in Michigan: The Rivers, The Towns, The Taverns,” chronicles Michigan rivers and assigns them beginner, intermediate and veteran categories. And Fletcher is sure to point out a nearby watering hole at the end of each chapter. He covers both the Lower Peninsula — which boasts Michigan’s longest river, The Grand River, that takes 13 days by canoe to complete — and the Upper Peninsula, where you can find the Ontonagon River, Michigan’s faster river, pumping up to four billion gallons of water in the springtime.

For more information on Flint River activities, visit www.flintriver.org. For more on Fletcher, visit his website at www.canoeingmichiganrivers.com.