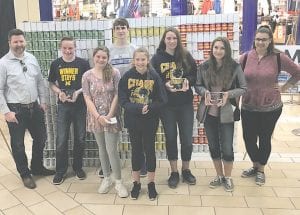 The HEARTH Homeschool Homies (Genesee County) and Girls Giving for Good Girl Scout Troop 76336 (Lapeer County) each designed and built sculptures made out of canned goods that were on display at the Genesee Valley Center in Flint Township throughout the month of March.

The HEARTH Homeschool team made Uno cards, sending a message to “reverse” hunger. The Girl Scouts team built a “Rainbow of Kindness.”

“This was our first Canstruction competition in the Flint area, and it was a great success,” said Kara Ross, President and CEO of the Food Bank of Eastern Michigan. “Not only did our teams help provide thousands of meals to families, they also got show off how creative our local students are. We are hoping Canstruction grows and becomes a yearly tradition.” 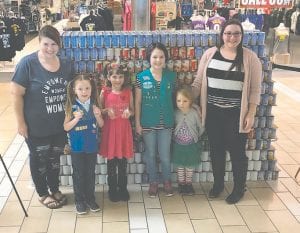 The HEARTH Homeschool team won four awards: Structural Ingenuity; Best of Use of Labels; Best Original Design; and Most Cans. The Girl Scouts won Best Meal and People’s Choice. Walmart donated all of the canned goods used in both sculptures. HAP, Charter Township of Flint, and the Genesee Valley Center served as sponsors for the competition. Architects from H2A Architects, Sedgewick + Ferweda Architects, and AMAG served as volunteer mentors for each team to assist with the designs. Judges included representatives from Walmart, HAP, Charter Township of Flint, and the Flint Firebirds.

Canstruction competitions are hosted all over the world, with all cans being donated to local food banks at the conclusion of each competition. The organization was founded in 1992 and has generated more than 50 million pounds of food for food banks since its founding.