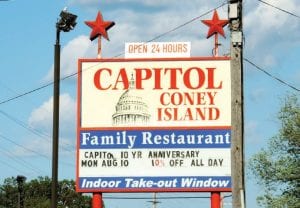 Serving the Flint area for 49 years, Capitol Coney Island, under new ownership since 2005, will be hosting a public 10-year anniversary celebration on Monday.

Owners Nick and Anastasia Pirkovic and the Capitol Coney Island team are inviting the public to come and help celebrate by offering 10 percent off every meal for the entire day.

From 4-8 p.m., the restaurant will also be offering a variety of events including live graffiti by local artist Charles Boike; live music, a coney eating contest, and a car cruise to help kick off Back to the Bricks in downtown Flint.

Capital Coney Island currently employs a staff of 25 and has served more than 800,000 people throughout the past 10 years.

“We are happy to continue serving the people within the Flint community,” said owner Nick Pirkovic.

“This is our way of saying “thank you,” to our customers, the community, and the city of Flint for supporting us over the past 10 years. Without strong local support, none of this would be possible.”

Capitol Coney Island originally opened in 1966. The Pirkovics and business partners purchased Capital Coney in 2005, and have been in the restaurant business for roughly two decades. In 2013, they did a major remodel of the restaurant for the first time in nearly 50 years.

To find out more about the 10-year anniversary celebration visit, eatcapitol.com.