Car chase from Burton ends up in Davison Township 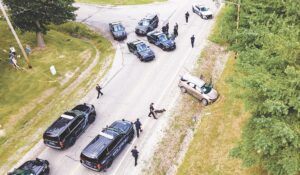 An aerial view from a drone above Sunday’s crash scene on Gale Road at E. Court Street shows the suspect’s vehicle in the ditch, surrounded by police officers and at least one K-9 unit. Photo courtesy of Richi K. Pedersen

DAVISON TWP. — A police pursuit that began in Burton ended up with the suspect vehicle crashing into a ditch at the corner of Court Street and Gale Road, Aug. 1.

According to Davison Township Police Chief Jay Rendon, Burton police responded to a reported retail fraud at Media Reload, 4231 E. Court St., shortly before 4 p.m. on Sunday. Employees there reported the suspect tried to sell what they believed to be stolen goods and left the store when they were refused.

Police attempted to stop the suspect’s vehicle as it was leaving the store, but the driver sped off leading police on a chase through Burton streets at speeds sometimes reaching as much as 90-100 mph.

Rendon said the suspect blew through the red light at Court Street and Irish Road at about 90 mph, at which time Burton terminated its pursuit at 4:01 p.m.

About a minute later the car attempted to make a right turn from eastbound Court Street onto Gale Road and lost control, slamming full speed into a ditch on the east side of Gale Road.

At that time, both the suspect and driver, a 28-year-old man, and his 36-year-old female passenger got out and attempted to flee but were quickly stopped and apprehended by police.

No further information on the suspects was available. — G.G.