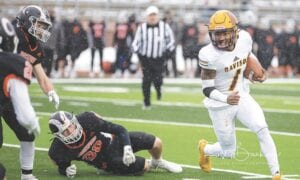 DAVISON — The Davison Cardinals are heading back to Detroit to defend their D-1 state championship after rolling through the state semifinal on Saturday.

Davison (11-0) kept its undefeated season alive with a 27-3 win over the Rockford Rams (9-1) in Rockford. The Cardinals were once again propelled by a strong defensive effort, holding the Rams to a field goal and just 201 yards of total offense.

Davison got the scoring started with a nine-yard touchdown run from Te’Avion Warren in the first quarter. Rockford answered on the following drive with a 36-yard field goal, but that would be the Rams’ only score of the game.

The Cardinals responded with a five-yard touchdown run by Warren with 4:24 to go in the second quarter but missed the extra point to take a 13-3 lead into halftime. Warren racked up 163 of Davison’s 227 rushing yards and ran for two scores.

Davison’s defense broke the game open in the third quarter when Will Watkins intercepted a Rockford pass and rumbled into the end zone for a touchdown. Cardinals quarterback Dion Brown Jr. then tacked on to the lead with a 31-yard touchdown pass to Jay’Len Murray Flowers late in the third quarter.

Payton Pizzala (34) and Harrison Unger (10) ran onto the field as the Cardinals were introduced carrying an American flag and a Davison Cardinals flag.

Brown, a senior wide receiver who made his second start at quarterback for Davison, completed 7 of his 14 pass attempts for 97 yards with a passing touchdown and 51 yards rushing.

“Dion controlled the game and made big plays with his feet and through the air when called upon,” said Davison Head Coach Jake Weingartz. “He continues to improve each week and play lights out in the most critical situations.”

The Cardinals defense, which held Detroit Catholic Central to just seven points in the regional final, forced two Rockford interceptions and shut down the Rams’ vaunted offense. Clarke Hamilton recorded 7.5 tackles for Davison, followed by Will Watkins with 6.5 tackles, Landon Kish with 6 tackles, Carter Herriman with 4.5 tackles and Harry Unger with 3.5 tackles and two sacks.

“Holding a high-powered offense like Rockford’s to just three points is quite an exclamation point for our defense,” Weingartz said. “Our defensive coaches did a great job installing a game plan throughout the week, and it was very evident on Saturday that they were on the same page with the players.”

With the win, Davison will now face West Bloomfield (10-1) in the state final at Ford Field. West Bloomfield defeated Belleville, 35-34, in double overtime on Saturday to earn a spot in the championship game.

Weingartz said that his team will have to lean on its defense to limit a Lakers squad that’s loaded with high level college recruits.

“We have to limit their big plays and control the football to keep their offense off the field,” he said. “If we do that and win the turnover battle, we should be in good shape.”

Kickoff for the D-1 state championship has been set for 1 p.m. on Saturday at Ford Field in Detroit. The game will air on Fox Sports Detroit.