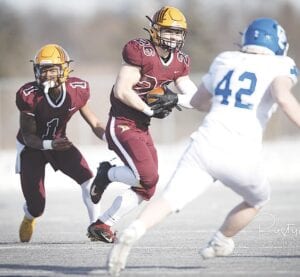 LAPEER — The Davison Cardinals punched their ticket to the D-1 state semifinals with a 20-7 win in the regional final over Detroit Catholic Central last Saturday.

Davison (10-0) gutted out a tough defensive battle with Detroit CC (9-1), breaking a 7-7 tie in the fourth quarter with two touchdowns in the last 11 minutes of the game. The Cardinals outgained the Shamrocks 327-111 but needed late scores and big stops on defense to pull out the victory.

Wide receiver Dion Brown Jr. made his first-ever start for Davison at quarterback, completing 11 of his 20 pass attempts for 151 yards, two touchdown passes and no interceptions. Brown filled in for two-year starting QB Brendan Sullivan, who entered early enrollment at Northwestern University and was no longer eligible to play for the Cardinals.

Davison Head Coach Jake Weingartz praised Brown for his effort, saying that the senior wide receiver made a seamless transition to his new position in just two weeks of preparation.

“Dion did a great job commanding the offense, especially against a football powerhouse like Catholic Central,” Weingartz said. “He’s extremely athletic and quick, and he’s got a great arm. You can’t replace a future Big Ten quarterback like Brendan Sullivan overnight, so for Dion to grasp the offense that quick in two weeks is a testament to him and our coaching staff.”

After a scoreless first quarter, Detroit CC opened the scoring with a goal line touchdown run from quarterback Declan Byle. Davison answered with a four-yard touchdown pass from Brown to Te’Avion Warren.

The score remained knotted at 7-7 until the fourth quarter when Brown hit Payton Pizzala for a 14-yard touchdown, giving the Cards a 13-7 lead. Davison then iced the game with a four-yard touchdown run from Carter Cryderman with 1:58 to go.

Despite outgaining Detroit CC nearly 3 to 1, Davison struggled to find the end zone early and came up empty on three of its four red zone trips in the first half. Weingartz said that long drives in the second half helped to break the game open.

“We finally just wore them down and popped some big runs,” he said. “That was how we were able to have success late in the game.”

The Davison defense also suffocated Detroit CC, holding the Shamrocks to just 31 yards of total offense in the second half. Harry Unger led the Cardinals with seven tackles, while Will Watkins chipped in with 3.5 tackles.

Davison will continue its state championship defense against Rockford (8-0) in the state semifinals this Saturday. Kickoff is set for 1 p.m. at Ted Carlson Stadium in Rockford.

Weingartz said that his team needs to improve offensively and capitalize in the red zone to beat a strong Rockford program.

“We’ve got to clean some stuff up and execute better with our offense than we did on Saturday,” he said. “I’m confident that Dion will improve from one game to the next. We just have to get into the swing of things with our offense.”

The winner of the Davison/Rockford game will advance to the D-1 state championship at Ford Field in Detroit.