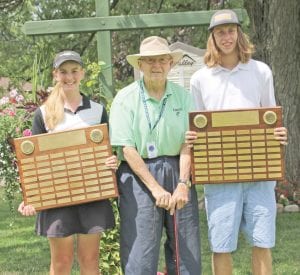 Brooke Thomas, a 2016 Flushing High graduate, carded 3-under-par 69 to take the girls’ championship, while 2016 Holly grad Kyle VanBoemel shot 2-under 70 to defend the boys’ title he won last year. The Henrickson Award is the last of the FJGA’s triple-crown events for the summer and was contested for the 19th time Monday.

Thomas had six birdies, three on each side, to beat her previous low of 72, shot three weeks ago in the Mancour Cup at Flint Elks Club. Prior to that, her best score was 76.

Starting on the back nine, Thomas got rolling with three consecutive birdies on Nos. 13-15, then started the front nine with a 40-foot putt that hit the cup, popped into the air and dropped into the hole for another birdie on No. 1. She also had a 30-foot birdie putt on No. 5.

Thomas finished seven strokes ahead of Grand Blanc grad Cammi Lucia, who placed second for the second straight week. Lucia’s 77 last week was one stroke behind Davison’s Karsen Johnston in the Mallon Cup.

VanBoemel needed a scorecard playoff to beat Flushing grad Joe Montpas, who also shot 70 and was going for a sweep of all three triple-crown events. The playoff went to the third handicap hole, No. 4, which VanBoemel birdied and Montpas bogeyed.

VanBoemel had four birdies, on Nos. 3, 4, 14 and 15, and also drained a 20-foot putt to save par on No. 9. It was the second straight year he won the tournament on a scorecard playoff, after beating Holly High teammate Mitch Hughes last year on the second hole.

Both Henrickson Award winners will continue their golf careers in college next year. Thomas will play at Bethel College in Indiana, where she will join senior sister Chelsea on the team. VanBoemel will play at Northwood University, where he will cross paths with Hughes, a sophomore on the Saginaw Valley State team.

Flushing senior Kerri Parks was third in the girls’ meet with a 77, Lapeer’s Brooke Gibbons shot 82 and Erin Walter carded 84.

The FJGA will return to regular-season play next Monday at Spring Meadows in Linden. The final week of the regular season will be Aug. 1 at Captain’s Club, followed by the season-ending tournament Aug. 8-10 at Swartz Creek Golf Course.