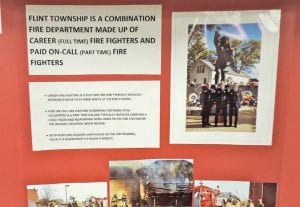 This display was used by the fire department during a career day at Carman- Ainsworth High School, as part of an ongoing effort to recruit new members.

Burkley showed the township board a display put together with photos of firefighters in action and additional details about what is required to become a firefighter.

Recruiting is an ongoing challenge for the department, which like many departments nationwide is hampered by constant turnover, retirements and less interest in the work. Burkley said they are hoping to have some new recruits in place to enter the training academy by fall.

The department is adding staff due to passage of the Safety Millage by voters in November.

Burkley asked township officials to direct the Civil Service Commission to establish a new a list of eligible candidates for full-time positions.

Township Supervisor Karyn Miller noted that the hiring process takes time and it has been about five years since fulltime hiring last took place.

Miller said the process for hiring a new chief is outlined in the firefighters’ contract. She also said the process was being put off during negotiations, which are expected to be settled within six months.

Kasle asked what negotiatons had to do with hiring a new chief.

Miller said that decisons about how to proceed had been privately discussed in a closed session meeting with their labor attorney, where Kasle was present.

She also said the hiring process took two years before the last chief was appointed.