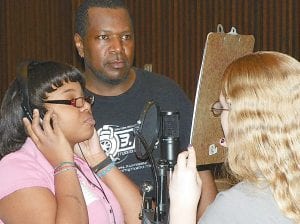 Pharlon Randle of BPR helps Emanee Walker with her recording while Faith Parsons holds up the lyrics on a clipboard.

FLINT TWP. — Jeff Houck planned to be a professional baseball player when he grew up but instead specializes in high-tech security systems for the U.S. government and big business.

Pharlon Randle wanted to be a professional musician but a regular job driving a school bus steered him to a career as a music producer.

Jimmy Colley had no sense of direction when he was in middle school but his restless energy led to a career as an occupational therapist with the Genesee Intermediate School District where he helps fidgety kids settle down to learn.

Houck, Randle and Colley were among 13 presenters last Wednesday at the 4th annual Career Fair for eighth-graders at Carman-Ainsworth Middle School.

The purpose is to get kids interested in what they want to be beyond high school, said Wendy McCombs, a middle school counselor. Students attended four 20-minute sessions based on their responses to a survey taken a few months ago.

Houck, the security specialist, said as a middle-schooler growing up in Southern California the only classwork he took seriously was handwriting to prepare himself to sign autographs as a pro athlete.

After his sports ambitions fizzled, he ended up working for a company that designed and sold fire alarms. When he and his wife moved to Michigan, he used that experience to connect with a company that designed security systems. That led to his current job with Siemens Industry Inc. which he described as the third largest company in the world in terms of number of employees and annual profit.

Houck said he designs security systems for the U.S government including for bridges, tunnels, airports and nuclear facilities. He’s also worked for big companies like Dow Chemical and General Motors.

“It’s a great job. The technology changes every day,’’ he said. One example he gave is facial recognition software which helps identify wanted or suspicious people in airports and public places by analyzing key facial measurements. Several times daily, the technology is used to catch people and stop them before they start (illegal activity), he said.

Houck said a lot of what he knows was learned from making mistakes and studying CDs and Internet sites and going to seminars.

“The world is my university,’’ he said. “There are all different avenues to a career,’’

“My plan was I was going to be a superstar like Little Wayne,’’ Randle said. “It didn’t work out that way.”

A music producer, artist and songwriter, Randle started his Flint-based business – Bangtown Productions and Recordings Studios on the Go – to reach out to students interested in musical careers.

“Pay attention to what you’re doing,’’ Randle advised. “I prepared myself for what I do without knowing I was training.’’ Driving a school bus taught him patience and how to work with students.

“I go to classes everyday and teach kids how to make songs,’’ Randle said.

He helped several students write and record original verses to be included on a CD he will make from the Career Fair sessions. The finished product will be aired during a regular Friday broadcast at the school.

Colley, the occupational therapist, brought a variety of diagnostic tools he uses in his job such as a floor balance beam which he walked across like a plank. Students having trouble with balance are likely to be having trouble with math, Colley explained.

To stress the benefits of exercise as a learning aid, Colley talked about Brain Gym, a movement-based program that enhances learning.

Colley said that exercise is the number one way to balance brain chemicals. He said he struggled academically until he learned to incorporate exercise in his studies. “I chose occupational therapy as a career to help people who were similar to me,’’ he said.

Other Career Fair speakers included Jay Rendon, a Davison Township police officer; Doug Chilson, a paramedic with STATS EMS; Laurie Boone, a naturalist with Sloan Longway; John Crawford, from General Motors skilled trades; Katie McGlashen, a naturalist from For-Mar; Chuck Russell, a manager at Taco Bell; Rico Phillips, a firefighter with the City of Flint; Steve Wandmacher, a human services professor at the University of Michigan; Terrance Daniels, a system engineer for Consumers Energy and Marilyn Hoerauf, who is self-employed in the health services industry.