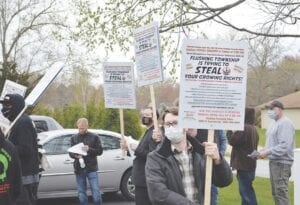 FLUSHING TWP. — A proposed home occupation ordinance continues to face backlash and questioning from local medical marijuana caregivers inside and outside Flushing Township.

Before the public hearing, around two dozen caregivers and medical marijuana supporters held a peaceful protest outside Flushing Township Hall to voice their opposition to the ordinance.

Once the hearing started, caregivers and medical marijuana patients aired their frustrations to the Planning Commission, saying that the proposed ordinance is too restrictive and would force many licensed medical growers to stop cultivating marijuana in Flushing Township.

As proposed, the ordinance would require medical marijuana caregivers to have at least five acres of property to grow marijuana, limit growing space for plants to 375 square feet and prohibit growers from operating within 50 feet of property lines. It would also require caregivers to grow/store their marijuana plants in a secure, locked structure on their property and obtain a special land use permit to grow marijuana.

Buddy Dalton, a Flushing Township grower who helped to organize the protest, said that caregivers should not be classified in a home occupation category or required to get a special use permit, since they are only allowed to serve five patients under Michigan law.

“The term ‘medical caregiver’ is under fire from this board, and we feel very much under attack,” he said. “Calling us a home occupation is not only incorrect—since we are not a business—it’s also not possible given our current system. What business in the world is only allowed to have five customers?”

Dalton said that forcing caregivers to grow their plants inside a structure would deprive them of using natural sunlight during the growing season and force them to invest in expensive lighting and other equipment for indoor growing.

Dalton and other caregivers also took issue with the ordinance’s provision that would allow township officials to inspect growing operations, saying that such inspections would violate their privacy and property rights.

“Your ordinance is so restrictive that not only will you ban the majority of caregivers, especially with the five-acre allotment, your case will go to the Michigan Supreme Court and Flushing Township will be on the radar…for making a precedent to ban legal medicine,” she said. “You will be taking away my lifeline.”

In recent months, township officials have said that the home occupation ordinance is intended to discourage the theft of medical marijuana, prevent illegal outdoor grow operations from popping up in the township and ensure that caregivers live on the property where they are growing marijuana.

Some caregivers in attendance at the hearing said that they supported the township’s efforts to curb illegal marijuana grow operations but requested for the Planning Commission to change the verbiage of the proposed ordinance so that it won’t target licensed caregivers.

The Planning Commission is expected to review and discuss the ordinance at next month’s meeting.