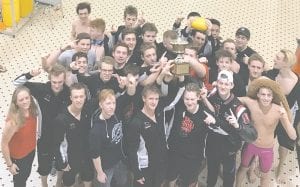 Grand Blanc took the title with 619 points. Fenton was a distant second with 385 points and Flint Powers was third with 257. Lapeer was fourth with 147, Davison fifth with 145 and Swartz Creek-Flushing sixth with 143. Owosso placed seventh with 127, Holly was eighth with 107, Corunna ninth with 102 and Carman- Ainsworth 10th with 94. Brandon was 11th with 67 and Kearsley 12th with 49.