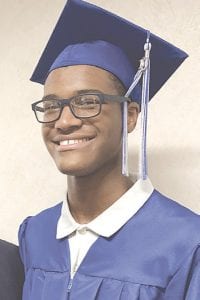 First funded by the Bill and Melinda Gates Foundation in 2018, the national scholarship is awarded to 300 outstanding students each year. This year there were 36,500 applications. To be eligible for the Gates Scholarship, a student must be nominated by a staff member of their high school.

The student then submits a formal application, including a letter indicating why they would be a good candidate for the award. DeEsmond was notified in January that he was a semi-finalist for the scholarship, finalist interviews took place in March and he received official notice of his award in April. DeEsmond will be attending The Gates Scholarship Summer Institute in Dallas, Texas later this month.

This four-day conference is for the 300 top student leaders and is designed to welcome and empower new Gates Scholars as they prepare for their first year of college. DeEsmond is no stranger to the college experience.

During his four years in high school, DeEsmond achieved a GPA of 3.902 and not only completed all of his high school graduation requirements, but he achieved 54 college credits at Baker College as well.

DeEsmond plans to attend Stanford University in the fall with a long-term goal of a career in medicine as a physician. — G.G.