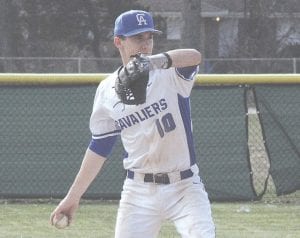 Carman-Ainsworth’s Sean Jerome throws over to first in between innings on April 23.

FLINT TWP. – The Cavaliers were slated to play at Bay City Central on Monday night and to host Bay City John Glenn on Tuesday, but no scores or details were reported.