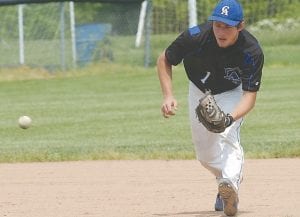 SWARTZ CREEK — After dispatching Swartz Creek in pre-districts on May 31 and Flint Northern, 20-1, in the district semifinals, the Flushing varsity baseball team came into last Saturdays No. 3-1 district championship contest firing on all cylinders.

Carman-Ainsworth, on the other hand, didn’t get its first BIg Nine win until it beat Powers on May 16 in the second game of a league doubleheader. That’s the ever-building drama that was in play last Saturday when the Raiders and the Cavaliers squared off for the fifth time this season, and with the added advantage of downing Carman-Ainsworth during the regular season, 14-1, and, 19-0, on May 9 and, 11-0, and, 10-1, on May 13, Flushing managed to bring home it’s fifth district title in six years with an 11-1 five-inning victory.

“Carman-Ainsworth was down 5-1 in the fourth looking to rally with one out when Colin Heaton hit a line shot (that was) snared in the hole between second and third. Flushing shortstop Justin Fisher then doubled up a Cavailer runner at third to end the inning,” said coach Tom Miller. “Flushing added two runs in the fourth and four runs in the fifth. All six runs were unearned. (Flushing) benifited from the Cavaliers four errors.”

The difference in the contest for the Raiders was freshman hurler Kyle Randick, who struck out four batters and allowed just one hit and three walks to help lock down the decision. Flushing also got two hits and three RBI from Sal Ausiello and posting three RBI was Matt Webster.

Coming through with the Cavaliers’ only hit for the game was Justin Hubbard and Nick Hill scored a run.

“I really felt our kids had a chance. We were getting runners on base and putting the ball in play. Again, the error bug hurt, giving Flushing six tack-on runs and extra outs. It was a rough season on all fronts. The weather prevented the Cavaliers from playing in the month of April with just three games. It also forced us to not be able to practice outside. We had many days during the month we were forced to practice inside. In the month of May we played 20 games in 24 days. We had alot streches which we played back to back. This really took a toll on our pitching,” Miller said.

Flushing competes on Saturday at the Saginaw Heritage regional No. 1- 1 at Saginaw Valley State University against Traverse City Central for the right to face the winner of the Midland vs. Davison game later that day for the regional crown.

In order to make this matchup come to fruition, Carman-Ainsworth put down Flint Northwestern, 18-3, in three innings in the other semifinals contest on Saturday after drawing a bye for round one. Having scored two runs in the first, 10 in the second and six in the third, standing tall for the Cavaliers with a two-RBI triple in the second inning that started a 10-run stanza and a single was Josh Smith. Jamal Dixon got the win with five strikeouts and three hits allowed. Carman-Ainsworth also benefited from nine walks by the Wildcats’ pitching staff, three hit batsmen and seven errors.

Carman-Ainsworth, 4-25 overall, will return 11 of its 13 players next season, including four juniors, five sophomores and two freshmen.

“As coach I though we improved all season. Most of the time we did not loose to other teams. Our young mistakes allowed them to beat us,” said Miller. “I expect us to be much better, only loosing pitcher/outfielder Senior Nick Hill from our every game line-up.”