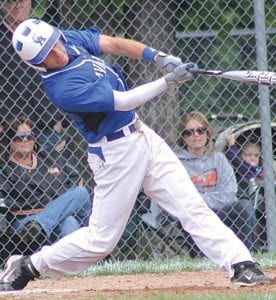 CLIO — With a regular season record of 10-22 overall, not many people gave the Carman- Ainsworth varsity baseball team much of a chance in the playoffs. The Cavaliers have been overcoming adversity of all shapes and sizes this year, though, making them the wildcard of Clio district No. 3-1.

What that created for Carman-Ainsworth was a never-say-die attitude that propelled them past the host Mustangs, 4-10 Flint Metro League, in the district semifinals last Saturday, 5-3, after having the good fortune to draw a bye for the initial round of play.

With the Cavaliers scoring a run in the first inning and two more in the third, the game was tied at 3-3 in the top of the seventh with two outs when Colin Heaton and Jamaal Dixon managed to reach base on Clio fielding errors. The duo then scored the game’s final two runs on back-to-back singles by Brennan Gleason and Jeff Wilhelm. Heading up these efforts for Carman- Ainsworth was Justin Hubbard with two doubles and two runs scored, Heaton had two hits and two RBI and Gleason got the win on the mound after giving up six hits and two walks with six strikeouts. 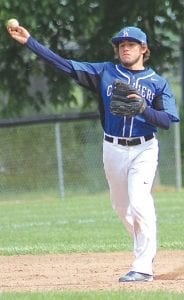 Later that day, the Cavs took the field once again to decide the district championship in a head-to-head matchup with league rival Flushing, 4-10 Big Nine, that the squad ended up losing, 11-0. The Raiders took an early lead in this one and then kept on moving forward, putting a run on the board in the first, two more in the fourth and five in the fifth to take an 8-0 lead before the game was postponed until Monday because of rain with one out and runners on first and third base. Once the game was resumed Flushing scored another three runs to earn the win by mercy. For Carman- Ainsworth, Brett Dortch and Wilhelm had a hit each.

“Carman-Ainsworth finished the season with a record of 11-23 (overall). I was proud off how our kids played,” said coach Tom Miller. “We had eight onerun losses and four by threeruns or less. We could have been 23-11. We have 11 returning players for next year. Pitching will be our stong point.”

In the other district semifinals matchup, Swartz Creek, 7-9 Metro, was edged out by Flushing, 1-0. The Raiders are next in action at Saginaw Valley State University on Saturday at 10 a.m. in the semifinals of regional No. 1- 1 against host Saginaw Heritage.