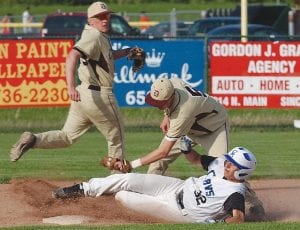 Carman-Ainsworth’s Justin Hubbard (#32) slides in under the tag against Davison.

DAVISON — Monday was the tale of two games for the Cavaliers’ varsity baseball team, with the first contest of a Big Nine doubleheader ending in a 13-1 five-inning win for Davison. While the Cardinals did lock down a share of the league crown with the victory, Carman- Ainsworth’s offensive efforts were led by Brett Dortch and Jake Weissend with a hit apiece and Jamaal Dixon doubled and scored his teams only run.

The Cardinals also needed to grab the second contest in order to win the Big NIne title outright, and while the Cavaliers didn’t make it easy the Cardinals were still able to pull out the win, 4-3. 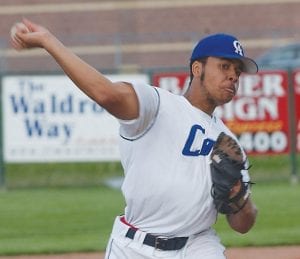 “The young Cavalier’s pushed Davison to the brink, only to come up short. Carman-Ainsworth led 3-2 with one out and nobody on before Davison catcher Pete Panos doubled off the right centerfield wall to start Davison’s rally. Panos went to third on a wild pitch before Cavaliers’ relief pitcher Justin Hubbard walked the next two batters, one of them intentional, and Davison pitcher Maverick Prine hit a walk off tworun double off the center field wall to win it,” Miller said. “Carman- Ainsworth opened the game with a run in the first and two in the second led by junior centerfield Chris Moran, who had two hits (including) a two out triple that scored Colin Heaton and Brandon Bobcean. This gave the Cavaliers a 3-0 lead until Davison scored once in the fourth and sixth.”

Freshman pitcher Brennan Gleason gave a solid performance for Carman-Ainsworth in the second contest, allowing one earned run on two hits with three strikeouts in six innings of work, Colin Heaton had a double and coming through with a hit apiece were Nick Hill, Justin Hubbard and Brandon Bobcean.

“I was very proud how my player’s played in game two. We had one inning with two errors but we push the Big Nine champs to the brink. Brennan Gleason pitched outstanding, keeping the Davison batters off balance,” said Miller. “I felt in the bottom of the sixth that Brennan was getting tired and Davison was starting to hit him. Justin Hubbard closed out our last win against Powers and I had confidence in him. Justin was one pitch away from striking out Davsion’s Prine before he had to groove a full count pitch to him. We showed what type of team that even though our recored is 3-22, we can play with anyone as long as we don’t give that extra out. Like a champion Davison won the game on there own without any tack on runs.”

Lansing’s Cooley Law Field tried to contain a non-league matchup between Carman-Ainsworth and Metro League rival Swartz Creek on Saturday, a tightrope the Dragons walked to a 9-3, victory in the opener. With Swartz Creek scoring five runs in the sixth to break open a 4-1 ball game, Justin Hubbard led the offensive charge for the Cavaliers with two of his team’s five hits, and notching a single each were Dortch and Dixon. Swartz Creek also won the nightcap, 9-0, on the arm of Mike Seyffert, who struck out 11 Carman-Ainsworth batters while only allowing two hits for the matchup, which came by way of Hubbard and Jake Weissend.

On Tuesday the Cavaliers have a bye for round one of Swartz Creek district No. 3-1 and begins their quest for a Michigan High School Athletic Association title on June 4 at noon against Flint Northwestern, which is also without an initial round contest. On the bracket’s other side, Flsuhing and the Dragons go at it on Tuesday at 5 p.m. for the right to take on Flint Northern in the district semifinals on June 4 at 10 a.m. The finals will then follow on June 4 at 2 p.m.