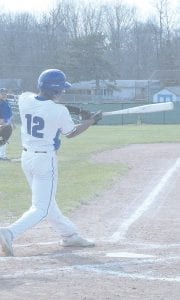 Carman-Ainsworth’s CJ Hall rips through the ball against Saginaw Heritage on April 23.

SAGINAW – The Flushing baseball team was just one run short from a district championship in a 1-0 loss in the title game to host Saginaw Heritage on Saturday.

The Raiders got to the championship game by toppling Swartz Creek, 1-0, in Saturday’s semifinal. Heritage was dominant in its semifinal win over Saginaw Arthur Hill, 20-1. Carman-Ainsworth lost an 7-6 heartbreaker to Flushing in eight innings in the district opener last Tuesday. Game stats were not reported. – B.P.