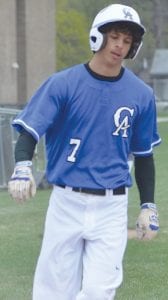 LANSING — Coley Law Field played host to a non-league doubleheader on Tuesday as the Carman- Ainsworth varsity baseball team lost game one to Genesee Area Conference- Blue rival Webberville, 6-5, before coming back to snatch the nightcap, 10- 0.

The opener saw the Cavs take a 4-3 lead before Weberville bounced back in the bottom of the sixth inning with three of its six hits to end up with a 6-4 advantage. Offensively, Carman- Ainsworth put up eight hits and stranded nine runners, as Justin Hubbard laid down two hits, Colin Heaton connected for a pair of RBI and Ethan Lambitz struck out eight in five innings pitched.

Headlining the second matchup for the Cavs was the four innings of hitless ball thrown by Hubbard prior to Heaton mowing down the final three Spartans batters in a row, as the duo combined to chart a no-hit pitching performance. Hubbard also was able to strike out nine of the 17 batters he faced, while giving up just two walks, Brandon Bobcean was good for three hits and two RBI and smashing two of Carman-Ainsworth’s 10 hits was Jake Weissend.

Brandon had been slated to visit Carman-Ainsworth last Thursday, but that contest was postponed until May 24 because of the passing of Cavaliers assistant wrestling coach Ron Weissend. The Cavaliers also had to reschedule Mondays Big NIne contest at Flushing to yesterday after we went to press because of rain.

In a Big Nine twin bill originally slated for April 30, Carman-Ainsworth lost on May 1 at Davison, 8-2 and 7-6. The first game was highlighted by the Cardinals taking a 3-1 lead prior to scoring five more runs in the third while holding the Cavs to just two hits for the contest. The nightcap was decided on a bases-loaded walk-off single by Davison after Carman-Ainsworth claimed a 5-3 lead in the top of the sixth, only to see things tied back up at 5-5 heading into the seventh. Heaton then responded for the Cavs by reaching base with two outs and scoring on a misplayed fly ball that came off the bat of Jamaal Dixon.

“It was a tough emotional day for the Cavaliers. Three starters did not play over the grief of (losing their) wrestling coach. Then to lose a tough game two like we did made it worse,” said coach Tom Miller.

At the Greater Flint Tournament on April 27 at Broome Park, Carman- Ainsworth lost to Kearsley, 3-0, after posting four hits and stranding eight runners on base. The Hornets got their runs by scoring twice in the fourth on a two-out rally that started with an infield single and then once more in the seventh. Heaton got pinned with the loss for the Cavs after giving up five hits with three strikeouts.

What that led to for the Cavs was an 8-7 win over Linden at Whaley Park in the consolation round of the Greater Flint Tournament on April 27 that was forged on the strength of a 7-2 lead. Headlining this nail biter for Carman- Ainsworth was Hubbard’s two-run double that helped ignite a five-run rally in the fourth. On the mound for the Cavs, Brennan Gleason earned the victory with five strikeouts in six innings, Alex Thompson worked his way out of a bases-loaded jam to get the final three outs of the game and Hubbard had two hits.

Lapeer West hosted the Cavs for a non-league twin bill on April 26, winning game one, 11-10, before losing the nightcap to Carman-Ainsworth, 10-3.

In that initial contest, the Cavaliers took and 8-5 lead into the sixth inning that the Panthers responded to with a six-run rally of their own, making the final two runs Carman-Ainsworth scored in the seventh too little, too late. Setting the example for the Cavs was Thompson with a triple, two singles and three RBI, Heaton added a triple and a single and posting a single, a double and three RBI was Brett Dortch.

As for game two, Carman-Ainsworth scored four runs in the second and five more in the fifth to break things open on nine total hits. On the other side of this equation for the Cavs was pitcher Hubbard, who gave up four hits and a walk with four strikeouts in five innings on the mound to get the win in addition to blasting a three-RBI double in the fourth. Thompson and Heaton were also in the mix for Carman-Ainsworth with two hits apiece.

While the Cavs may now stand in at 6-12 overall, 0-6 BIg Nine, five of those losses came by a run and three others have been by three runs or less.

“We are there in a lot of games. We just have been one play or hit from turning eight of those losses into wins. We just have to be a finish things,” Miller said.