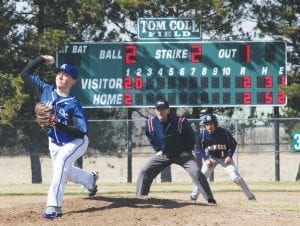 Carman-Ainsworth’s Austin Jerome fires a pitch in the Cavaliers’ game against Flint Powers.

FLINT — Even though defense was an issue for both sides, the Carman-Ainsworth varsity baseball team was still able to swipe the first game of a Saginaw Valley League doubleheader from Powers at Broome Park on Monday. Carman-Ainsworth won 15-6 in 10 innings.

The turning point came when the Cavs scored nine runs in the top of the 10th as Austin Jerome pitched a no-hitter for seven innings with nine strikeouts and a walk.

While Jerome did allow three earned runs on six hits in the top of the eighth, Austin Yost then managed to throw three scoreless innings to earn the decision, allowing two hits and a walk with four strikeouts. Also coming through was Ray Macko at 2-for-5 with four RBI and two runs.

In the second contest, pitcher Cooper Betancourt gave up seven hits with nine strikeouts to earn the complete game, 7-3. Spencer Fiewig did his part for the cause, as well, with two hits, two runs and a RBI in three at-bats.