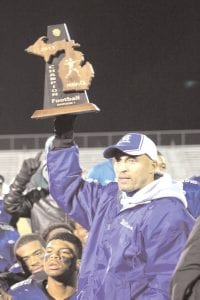 FLINT TWP. — Carman-Ainsworth football is going where just one Cavaliers’ team has gone before.

The Cavs will host Hudsonville in a Div. 1 regional playoff game at 1 p.m. Saturday, marking only the second time in school history the team has reached the third round of the state playoffs. The 2003 Cavs played a regional game at Utica Eisenhower, losing, 10-0.

Carman-Ainsworth kept this season going with a convincing, 34-14 victory over Brighton last Friday at home. Malik Seales and Jevonte Alexander scored two touchdowns each as the Cavs improved to 10-1, only the second time the program has reached 10 wins. The 1999 Cavs finished 10-1.

“It’s big for our program,” said Cavs coach Nate Williams. “This is 28 years that Carman-Ainsworth has been in existence and they’ve only held up that trophy once in those 28 years. It’s big for our kids. They’ve paid the price, they’ve been paying their dues, and they’re being rewarded for the work they put in.”

As they have most of this season, the Cavs jumped on the Bulldogs early and took a 20-0 halftime lead. Carman-Ainsworth dominated field position in the first half after Connor Storms’ 48-yard punt stuck Brighton at its own 7-yard line. Brighton wound up punting from its end zone and shanked the kick to the 17. The Cavs needed just two plays to score from there, with Seales running 15 yards, then scoring on a 2-yard run with 30 seconds left in the first quarter. Storms’ extra point made it 7-0.

Just 39 seconds later, Alexander ripped the ball away from a Brighton running back and took it 23 yards for his third defensive touchdown of the season and a 13-0 lead. Seales added a 1-yard touchdown run with 54 seconds left in the half for a 20-0 halftime command.

Brighton got on the board with 5:45 left in the third quarter on Joseph Clifford’s 1-yard run to make it 20-7. Carman-Ainsworth took its next possession into the red zone, but a Brighton interception on the goal line killed the scoring chance.

A sack by Darryl Johnson and John Jones stuck Brighton at its 8-yard line, and another Bulldogs’ punt from the end zone was shanked to the 15. Carman-Ainsworth cashed in the opportunity with Lorenzo Redmond’s 5-yard touchdown run for a 27- 7 lead with 42 seconds left in the third quarter.

Brighton cut it to 27-14 on Nick Brish’s 5-yard pass to Robert Spencer on fourth-and-goal with 4:42 left in the game. But, Carman- Ainsworth sealed the win on Alexander’s 25-yard touchdown run with 3:10 left.

Alexander finished with 109 yards rushing on 12 carries and 3-of-5 passing for 22 yards. Seales added 55 yards on 15 runs as Carman-Ainsworth rolled up 184 yards on the ground and 206 overall to Brighton’s 147. Tyler Minor had eight tackles on defense, while Brandon Walker had five tackles, a sack and an interception. Brighton finished at 6-5.

Hudsonville comes in at 8-3 after upsetting third-ranked Rockford, 19-14, last week.