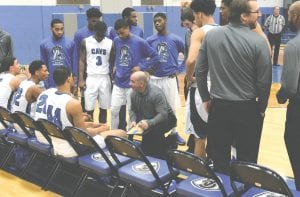 Carman-Ainsworth coach Jay Witham addresses his team during a timeout against Bay City Central on Jan. 16.

Carman-Ainsworth jumped to an 11-4 lead in the opening quarter, before erupting for a 21-2 run to close out the first half. The Cavs outscored John Glenn 40-12 in the second half, giving the game its final score.

Carman-Ainsworth shot 64% from the field, including 6-for- 13 from beyond the arc. The Cavs also won the rebounding battle 26-8.

Carman-Ainsworth was also scheduled to travel to Flint Powers Catholic on Friday, but the game was postponed due to weather. 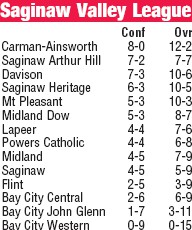