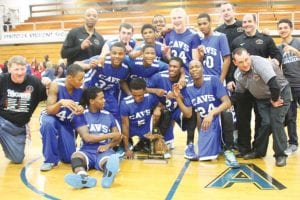 While the matchup may have appeared closer on paper, in reality the Cavs’ outscored Saginaw 22-6 in the first quarter and 13-3 in the second to go up 35-9 at halftime on its way to winning, 80-51.

Cameron Morse and Justice Green set the pace with 23 and 22 points, respectively, and Brandon Walker and Ja’Quin Jones scored nine each.

Last Friday, Carman-Ainsworth downed Swartz Creek, 83-62, to earn the No. 9-1 district title. Morse led the charge with a teamhigh 26 points, Justice Green had 18 points and Brandon Walker scored 15. The difference was the Cavs outscored the Dragons in every quarter, including 20-8 in the first, 23-16 in the second, 17-16 in the third and 23-22 in the fourth.

As the host of the district semifinals on March 5, Carman-Ainsworth used a 29-13 fourth-quarter scoring advantage to eliminate Flint Metro league rival Kearsley, 79-50.

Morse was the story for Carman- Ainsworth with a game-high 25 points, four rebounds, four assists and one block, Green complimented that effort by giving a 16-point, six rebound performance and scoring eight and seven, respectively, were Brennen Gleason and Brandon Walker.

The Cavs began the postseason on March 3 at home by downing Davison, 71-49.

Yesterday, Carman-Ainsworth, 21-3, played for the regional title against Mt. Pleasant, which defeated Traverse City West, 74-53, on Monday on the other side of the brackets.