Carman-Ainsworth boys reload on the hardwood 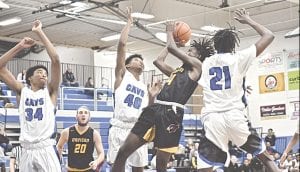 A trio of Cavaliers collapse on a Davison player during Carman-Ainsworth’s season opener on Tuesday night. Photo by Terry Lyons

FLINT – Carman-Ainsworth returns a wealth of talent from last year’s squad that tied for the Saginaw Valley League South title. The Cavaliers were dominant, finishing with a 17-3 record, but the season ended in heartbreak, as a Grand Blanc buzzer-beater sent Carman-Ainsworth packing in a 40-39 loss.

Even with the losses of Mike Fletcher, Donnal Conway, Rolaunde McCree and Dukarri Williams to graduation, Jay Witham’s roster boasts a war chest of talent in his seventh season as head coach. Dallas Green, a senior forward, leads the returning upperclassmen, along with guard Jayden Nunn and forward Patrick Hollis, both of whom are juniors. Last season’s freshmen phenom duo of Isaiah Jones and Mehki Ellison returns for their sophomore campaign. After coming off the bench last season, Jones, an energetic workhorse, and Ellison, a pass-first point guard, are expected to see increased roles in the Cavaliers’ rotation.

Witham also expects quality contributions from Rasheed Brown, a junior guard, and Remiel Odom, a sophomore combo guard, as a couple of newcomers to the varsity level.

Given the make-up of the Cavs’ roster, Witham plans to play high-pressure defense while focusing on protecting the paint.

“For us to be successful, we [need to] get better each day and play together,” said Witham. “We have one of the toughest schedules around. Every game will be interesting.”

Carman-Ainsworth opened its season Tuesday night, dominating Davison 81-45. Stats and details were not available prior to deadlines.