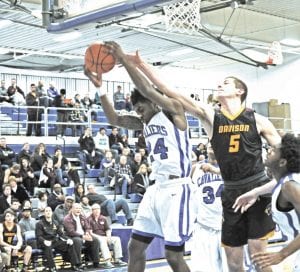 FLINT – The Carman-Ainsworth boys’ basketball team took one more step away from the chase pack as it upped its record to 14-1 overall, 8-0 SVL South with a 61-48 win over a short-staff Davison squad last Friday.

The Cavs have one loss on the season, against Clarkston on Jan. 3, and kept their composure against a different-look Davison squad that was playing without top shooter Jaylen Rutherford, who broke his left arm dunking against Pontiac Notre Dame Prep on Feb. 1. Cade Coleman is also out for the season after breaking his ankle earlier this season.

That mattered not to the Cavs who have one goal on their whiteboard; clinch the Valley title outright.

The Cavs flexed their muscle early with a 16-8 first quarter and even though Davison outscored them 9-8 in the second, a huge third quarter proved key with the Cavs putting up 19 points to Davison’s eight. Davison tried to storm back in forth with a 23-18 performance, but it fell short. That was just fine with Carman-Ainsworth that had gone on scoring runs of 8-0, 6-0 and 12-2 through the game. One more pesky opponent off their back and the Cavs were looking nowhere but forward with a big matchup with Flint Northwestern on Tuesday.

In Tuesday’s tilt against Flint Northwestern, the Cavs dominated for the 84-45 win to remain undefeated in the Valley.

The Cavs came out hot with a 15-9 first quarter and limited Northwestern to 10 points in the second while scoring 27 to lead 42-19 by halftime. The hole only got bigger for Northwestern as the Cavs put up 28 points to their 14 in the third and outscored Northwestern 14-12 in the fourth.

Duncan had 18 points, three rebounds and one steal, Lewis had 17 points, three steals and one assist and Fletcher had 11 points, four blocks and four steals.

Carman-Ainsworth is at Midland tomorrow.