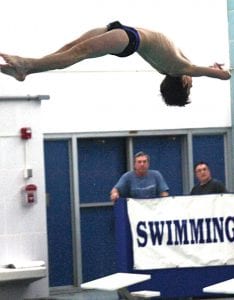 Connar Funck competes for the Carman-Ainsworth varsity boys’ swim team in the diving competition at a recent meet.

FLINT TWP. — After starting the season on Dec. 3 at the Fenton Relays, the Carman- Ainsworth varsity boys’ swim team will kick off 2012 at home today against the combined squad from Lapeer East and Lapeer West, a team that has a schedule featuring nothing but road contests because of its inability to host home meets at the city’s recreational center. Having also welcomed Swartz Creek, Fenton and Brighton to town for non-league matchups on Dec. 6, 13 and 19, the Cavaiers will then head north for the Saginaw Relays on Saturday prior to starting its final season of Big Nine play at home against Davison on Thursday and competing in the Genesee County Meet on Jan. 19-21 at Fenton.