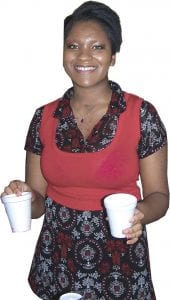 Students served food and beverages from around the world at World Cultures Week.

Sponsored by C-A’s World Cultures Club, the week began with a Sweet Treat Greet on

Monday followed by International Attire Day on Tuesday and a banquet of international foods on Wednesday.

Students paid $1 each for a smorgasbord of cultural foods from which the proceeds will be donated to Japanese tsunami relief.

Thursday’s Anime Day featured a costume contest for which the winner received a gift card for dinner for two at Top’s Asian restaurant at Linden and Lennon roads. Festivities wrapped up Friday with Music in the Halls.

It was the high school’s 11th annual observance, said Ann Giese, advisor of the World Cultures Club. A new element this year at the banquet were learning booths featuring artifacts and information about seven countries – Mexico, Denmark, Germany, France, Japan, Scotland and Peru. Students were given passport replicas to which they affixed a stamp to mark their visit to each booth.

Kendra Carrroll, a junior, who tinkered with the LEGOS displayed as a Denmark artifact, is a student in Giese’s class who said she received extra credit for attending the banquet.

“It was a lot of work and stress but we’re proud we pulled it off,” said Powell. “I am proud we got it done.”

Shelby Taylor, a sophomore, came to the banquet dressed for the part in a velvet corset worn over a peasant blouse to represent Scotland, one of the countries for which she was responsible for making a display. She also contributed strawberry tarts, a French treat, to the banquet.

Affecting an Irish brogue, she said she would love to become a language interpreter but probably will become a history teacher. She studying French at school and teaching herself Japanese.