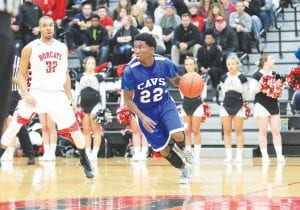 Carman-Ainsworth’s Josh Jackson handles the ball in a game earlier this season.

FLINT TWP. – Carman-Ainsworth is still in the early stages of rebuilding its boys’ basketball team, and that’s not a good time to take on one of the top teams in state.

Sixth-ranked Clarkston came into the Cavaliers’ gym Tuesday and handed them possibly the worst defeat in school history, a 63-9 drubbing.

Carman-Ainsworth had played just six games with its young team and hadn’t played in a week thanks to last Friday’s postponement against Saginaw.

The inexperience showed as Clarkston stormed out to a 20-2 first-quarter lead and a 39-6 halftime command. The Wolves shut out the Cavs 12-0 in the third for a 51-6 lead that triggered a running clock.

Eleven players scored for Clarkston, led by Foster Loyer with 13 points, Andrew Myers with 12 and Tabin Throgmorton with 10.

Juwan Evans, Jaylen Bradley, Jakavien Lewis and Leon Bell each scored two points for Carman-Ainsworth. Bradley also had two rebounds, and Melvin James had the other point and three rebounds.

Carman-Ainsworth will return to Saginaw Valley League-South Division play Friday night with a home game against Flint Powers Catholic. The Cavs will host Flushing in a non-league game next Tuesday.

The postponed game with Saginaw will be made up on March 3 at Carman- Ainsworth.