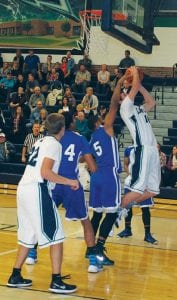 Jaylen Bradley (5) blocks a shot during the first half of the games at Lapeer.

FLINT – In the battle for Saginaw Valley League-South supremacy, as well as Genesee County bragging rights, the Carman- Ainsworth varsity boys’ basketball team took on Flint Northwestern at their place Friday. While the Wildcats definitely have some strong individual skill sets this season, the Cavaliers were able to counter that athleticism with a team effort spearheaded in and around the basket by Michael Fletcher’s 14 points, 10 rebounds, four steals and four blocks on their way to a 62-51 victory.

“He had a great night. Today (Fletcher) played like a man,” said Carman-Ainsworth coach Jay Witham. “He took care of the paint for us, rebounded the ball strong and handled it. Michael got double teamed a lot, but was still able to finish. He also hit a couple midrange shots. He played very well.”

After going up 17-13 at the end of the first quarter, Carman-Ainsworth got outscored 17-14 in the second to go into halftime with a slim 31-30 lead. The Cavaliers then charted a 31-21 offensive advantage in the second half to secure the win, including 17-11 in the third and 14-10 in the fourth.

“We could’ve (gone) into halftime with a bigger lead, but we ended up toward the tail end of the second quarter instead of sticking and getting the ball inside we ended up taking some shots from outside. Some bad shots,” said Witham. “They countered by getting to the basket and making layups. A lot of it was due to (FNW) having a fast pace, which we knew it was going to be like that.”

The other highlight for the Cavs was Terry Armstrong, who turned seven field goals into 14 points, five rebounds, two assists and a steal. Chan Pearson also made his presence felt with nine points that included a pair of 3-pointers, one field goal and a free throw, Omari Duncan threw down eight points and seven rebounds and putting up seven points was Omari Duncan.

“(Armstrong had) a quiet 14. He actually had a spectacular dunk on an alley-oop. He brought it home to give us some momentum at a time when we needed it,” Witham said. “(FNW) did a good job of rebounding for second shots and going up with it. They did an excellent job on the boards. They’re very athletic, very long and very aggressive. That’s what they did well. Troy Brown did a great job attacking the basket. I had to switch to a bigger defender, and that’s where Omari Duncan came in.”

While Troy Brown did hit three field goals and four free throws to score 10 on the night for the Wildcats, it was Antquan Brown who had a game-high 15 points on seven field goals and a free throw. Anthony Campbell and Darius Young also came through with eight points each, Wesley Fisher managed six points and five rebounds and Donovan Middleton had two field goals for four points.

“We lost our composure, so at halftime I talked to the boys about keeping their poise and calm down. I made the statement, ‘let your bodies go fast, but your minds go slow’,” Witham said. “We came out in the second half and did what we do all the time in practice against a 2-3 zone. We got the ball to the short corner and our big guy dove, or vice versa. We got it into the high post on the short corner and drove to the basket. We actually got the ball inside and had six or eight points right after the half.”

In a non-conference matchup at Owosso on Tuesday Carman-Ainsworth dominated to take a 67-42 victory. Standouts for the contest for Carman- Ainsworth included Armstrong, Lewis and Duncan.

“We started out hot shooting the ball from the perimeter. They play a 2-3 zone and we actually moved the ball,” Witham said. “We got wide-open shots after moving the ball around. We didn’t settle for one pass then take a shot. The ball got inside then got kicked out and we were able to knock down some outside shots.”